The exceptional mountainous setting of St. Moritz and mostly clear skies offered an exceptional arena for the 20 crews from Germany, Austria, Montenegro, and Switzerland to meet and compete against each other in this year’s 6th blu26 Fleet Race Battle in St. Moritz. However, it wasn't the familiar Maloja that set the tone this weekend, but rather a volatile North wind that paved the way for team Sailing Center Racing from Bavaria, with skipper Julius Thomas, to win this year’s regatta – against all pre-race favorites. The winning team was closely followed by Giachen Ün, with skipper Marianne Weber, second and blunote, with skipper Reinhard Rigling, third.

A recording breaking entry list
Considering this year’s broad entry list, the traditional Friday evening gathering was a great way to socialize and reconnect in between the teams - and get to know participants that newly joined the blu26 class. As for the sailing, a fair grid was accommodated for the numerous crews to compete on the six blu26 boats made available by the organizing team. The race committee, around race officer Marc Knöpfel, has made a remarkable job in executing a fair rotation mode across the two racing days, assuring just racing conditions.

A strong field challenging each other
Dynamic up and down courses resulted in an exciting event for the participating crews as well as for the spectators, with numerous knife-edge battle moments. The spaghetti dinner on Saturday evening was the ideal venue for in depth analysis of the flights among the sailors. Overall, the regatta committee was able to process 19 races held in an umpired Fleet Race Battle mode. Jury head Heiko Falch confirmed, “all teams performed in fair sailing conditions. The rare rule breaches resulted in immediate executions of the penalties, which did not infringe the smooth course of the race”.

A Bavarian blaze
National and international champions, local heroes that know lake St. Moritz inside out, and several very ambitious teams signed up. The entry list promised a thrilling competition! And it was the young team Sailing Center Racing from Tegernsee that led the pack and takes the trophy back to Germany.
The blu26 class thanks all the helpers, sponsors and especially Sailing Club St. Moritz, for their support and the generous hosting of the blu26 St. Moritz Cup 2017. 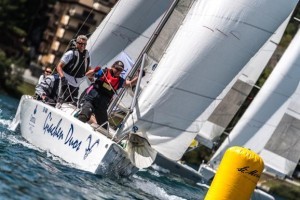 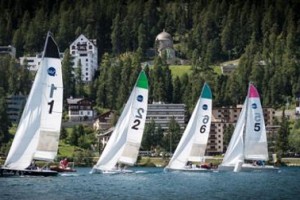 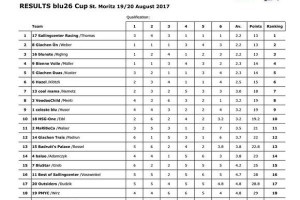 MSC Cruises and Fincantieri celebrate“Float out” of MSC view