French athletes Noesmoen and Goyard are the 2021 iQFOiL Champions

The first ever World Championship of the official sailboard for the 2024 Paris Olympic Games has closed its curtains last Sunday in Engadin, racing took place on the idyllic Silvaplana lake, near Sankt Moritz. The French and British Teams have been battling the podium positions for the whole week showing their strength in all different conditions and disciplines.

It was Helene Noesmoen (FRA) who managed to come on top and become the first ever and 2021 iQFOiL Women World Champion. Finishing the podium are Islay Watson (GBR) in second place and Saskia Sills (GBR) in third, the British Sailing team really showed its strength this week having multiple sailors in the top 10.

In the Men's fleet the Dutch team joined the Brits and French in the battle for the whole week as well. Nico Goyard (FRA) has been leading in the development of foil racing and shows that he is the best even in a one design class by winning the first 2021 iQFOiL World Championship. His achievement wasn't a surprise as he was one of the favorites for this event, after winning the iQFOiL International Games on Lake Garda in May.
Finishing the podium are Matthew Barton (GBR) in second and dutchman Luuc Van-Opzeeland in third place.

On the U21 women division the Israeli Team showed great form taking the first and third place, Shachar Reshef (ISR) becomes the first ever U21 World Champion. Second place went to Helle Oppedal NOR) and third place to Sharon Kantor (ISR).
On the U21 men division Finn Hawkins (GBR) becomes the first ever U21 World Champion finishing on an outstanding eight place overall. Max Castelein (NED) took second and Louis Pignolet (FRA) third, finishing 16th and 21st on the overall.

Next event on the iQFOiL calendar, is the European Championship in Marseille – the Olympic Sailing venue for Paris 2024 – from October 22nd to 28th. But before that, other events will keep the athletes busy, like the Asian and Nordic Champinships, respectively in China and Denmark, Kieler Woche in Germany and the Princesa Sofia Trophy, in Mallorca, a must-go-regatta for Olympic sailors. 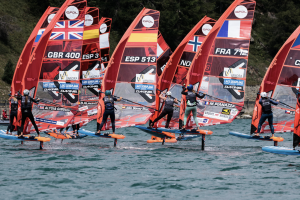 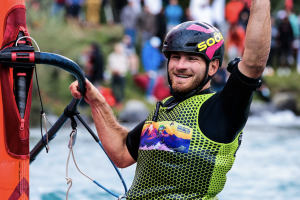 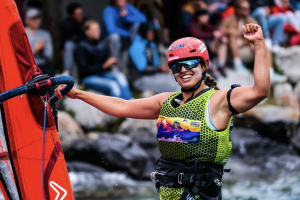 Challenging conditions in Campione del Garda for the young sailors