Velsheda appeared to have done all they needed to win around today's 25.43 nautical miles 'wiggly' J Class coastal race at the 2018 St Barths Bucket, but an error in their misreading of amendment to the instructions for the finish line robbed themselves of what would have been their first win of this 2018 St Barths Bucket Regatta. Their mistake handed the Race 4 victory to Svea, which looks set to win their first J Class Regatta together.

As the wind faded and shifted during the later stages of the multi leg course off the north west of the island, Velsheda were slicker in their gear changing, read the shifts well and were able to extend away from the persistent Svea. Up the final beat to the finish line they stayed offshore and added to their margin on their pursuers. But relief and satisfaction on board Velsheda turned to disappointment when their error became apparent.

"It is unfortunate but there you have it." Velsheda's tactician Tom Dodson admitted, "We feel like we sailed well and felt good about it, but we misread the amendment. But we have had a couple of beers and talked about it and in the end we are happy in how we sailed."

"Svea are quicker, a lot faster than us downwind and so we really felt we did well to have them behind us." Dodson concludes.

For Svea the fourth win from four starts here gives them an untenable lead in the three strong J Class fleet at the regatta. Tactician Charlie Ogletree paid a warm tribute to the way Velsheda sailed, admitting they should have won the race.

"It is unfortunate and I feel bad for them. They beat us. They sailed a great race and I really would have preferred it if their win had stood, But we are happy with the first. They had a better start than us, we were second best off the line. It was a race track with not too many opportunities. It was a great race, really great, neck and neck all the way around and lots going on."

The course took the J Class yachts from a downwind start in 12-14kts on a run to the north west to pass outside the rocky Grouper islets, reaching to Roche Table and then on a long upwind to the most westerly turning mark by the Ile Fregate. Velsheda lead Svea here by one minute and six seconds. But almost immediately, Svea came back at them on the run. After a straight bear away set they sailed a profitable heading breeze inshore and took a chunk out of Velsheda's lead.

It was down by the Roche le Bouf that the breeze went slightly more fluky, creating a transition zone as they emerged from the disturbed lee affect of the island. Velsheda were able to extend away again here, getting back on to their headsail smarter. And on the last upwind from the Ile Fourchue, Velsheda stayed offshore while their rivals tacked in closer to the Gustavia shore and appeared to lose out a little. By the finish line, Velsheda were more than two minutes clear of their rivals.

"We made some nice moves and our crew work was great again." Velsheda's Dodson reports, "But really we can't match them, especially downwind. So we have some work to do to find some speed. The key thing is that the newer, lighter boats accelerate quicker. We all drop to about 7.5kts in the tack but they accelerate quicker than us. So that will affect our strategy if we have to minimise our tacks."

Svea's strategist Kenny Read confirms that the intensity of the racing is as tight as ever. "Sure we would like there to be a couple more boats here this regatta, but the intensity is there. And everyone is getting better all the time. It such a blast. This is a really great group on Svea having great fun. These guys have made some strong strides and Tom steers the boat really well. They are already becoming very polished."

Svea go into the final day, expected to be a second round the island race, with a lead of six points over Topaz which score second today. Velsheda are now third overall, one point behind Topaz. 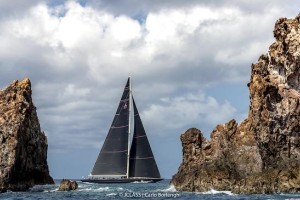 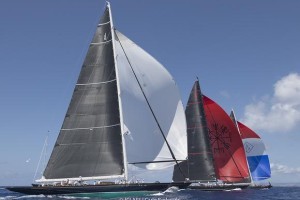