One year ago when the J Class fleet was at it hammer and tongs, racing their first regatta of a historic season, the newly launched Svea was in Europe still completing first sea trials.

Today they secured their first regatta victory together when they won the J Class at the popular Caribbean seasonal raiser, the St Barths Bucket.

Showing benefits from a winter of work rebalancing and optimising, as well as ever-improving crew work and cohesion, Svea won four of the event's five races and were only denied a clean sweep by the wily, benchmark crew on Velsheda who won today. They seized the lead from Svea just over half way around the 20 nautical miles clockwise circuit around the island of St Barths and never gave it up.

But while that cushion may look moderately comfortable, Velsheda's crew may fly out from the idyllic Caribbean island tonight reflecting that but for losing one race by 17 seconds and misreading the finish instructions Saturday - which cancelled out a likely win - they might have triumphed. Topaz finished their third St Barths Bucket regatta having made notable strides forward.

The Svea crew's success is hard won and deserved. They have almost made something of a virtue of triumphing against adversity.

After launching last year, it became apparent that the new J – which was built to an adapted original design by Tore Holm to have a centreboard – suffered from lee helm. That was an ongoing niggle last season.

Just three races in in Bermuda, a furling swivel gave way. The crew only just saved the rig, but their America's Cup J Class Regatta was over. Immediately another race against time ensued, battling to be ready for the J Class World Championship in Newport, RI.
And even here in St Barths they started on the back foot. Their long planned pre-regatta week of training was stymied because the swell was too big to land the shipping containers with all their race sails and hardware. All in all, that made winning today extra sweet for the Svea crew.

"We are so excited to win. It is incredible for all of us." smiled Svea's delighted project manager and tactician Charlie Ogletree, "And we are so thankful to Tom (the owner) for what he has done for us and he has done an incredible job driving this week. This kind of racing can be difficult, it is long and requires periods of excellent concentration and he has done an excellent job. We are happy today to see him having this success."

Ogletree adds, "It is great for us as a team. We are doing two more regattas so we are looking ahead now to Palma and to the Maxi Worlds in Sardinia. There is still a lot of work to do compared with the benchmark programmes Velsheda, Lionheart, Ranger and Hanuman. They have been doing this evolution programme for years. Velsheda have been doing this for double digit years and so we are happy to just prove ourselves competitive in such a short time frame.

And of his baptism of fire into the class he recalls, "Last year was hard. I had never been involved in a J Class boat at all before, and so to launch a J Class yacht and go racing in just one year is a big ask. To get to the regattas at all was big for us. We had flashes of brilliance, a race win Bermuda and then getting second at the Worlds. Overall I think we hit a lot of marks and allowed us to make these changes for the 2018 season."

Svea was in the Newport Shipyard from November until early February to correct the significant lee helm problem, which made the boat difficult to helm at best last year.

"We added some area to the leading edge of the keel and extended the length of the boom. In 1937 the boat was designed with a 12 foot long centreboard (which is not permitted under current class rules). The balance was not perfect." Ogletree highlights.

Svea has gained a small improvement in rating as her wetted surface has increased (due to the additional keel area) but is acknowledged this week as being quick downwind especially.
Velsheda won a proper boat race today rather than a simple processional speed test as round the island races often are. At over half way around the island they trailed runaway Svea by well over one minute. But they found better pressure and a nice lift. Velsheda squeezed up to Svea got them into a lee bow and finally forced the erstwhile leaders to tack back inshore to lighter breeze and that was enough for Velsheda to keep their noses in front. Round the rocky southern tip, Svea went jaw droopingly close to the rocks as they tried to cut the corner inside their rivals, but again they had to tack away and the race win was Velsheda's.

Their veteran tactician Tom Dodson reflected, "We feel like we had a good week. Today we sailed a nice race found some good shifts and pressure and Campbell (Field) and Rod Dawson did some great work keeping us in the breeze and working through the rocks. But it feels a little weird to have finished first across the line in four out of five races and not won the regatta. We leave here enthused for the season knowing we have to work harder and do some work on finding some more speed. I would also credit Topaz for sailing really well this regatta they won all the starts and they are looking quite polished now."

Topaz's third today meant they narrowly lost second overall to Velsheda. Helmsman Peter Homberg said: "I have a mixture of emotions. These are such beautiful boats to sail how can you not be happy to be here in St Barths, racing with lovely people? Our team tried really hard and we sailed better than the results show. I am happy with our starts but the other guys might be a little faster than us. There is some optimising we can do to the boat but really I am not in favour of an arms race in this class like this. That is a tricky one and the class administrators need to be smart to find the balance of elegance and racing. They have to write a good rule and police it otherwise the rule gets pushed too far and it gets pressed and you hate to see that. I think it is such a wonderful thing in this class but I think we have to be careful as we do in all classes to try to prevent arms races." 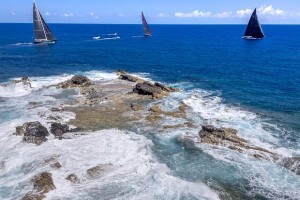 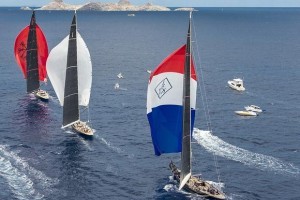