After putting on a spectacular curtain raiser to Europe’s largest and longest-running superyacht regatta yesterday, the J Class yachts Svea and Velsheda today showed The Superyacht Cup Palma fleet they can hold their own in even such exalted company.

Racing in the Pantaenius Race within the seven-strong Class B – the largest at the regatta – the J Class duo uniquely started together within the staggered sequence that has Superyacht Cup competitors starting separately at two-minute intervals.

After sharing a win apiece yesterday, today Velsheda not only got the better of Svea but also took the win in Class B ahead of Mari-Cha III in second, the 45m ketch pipping Svea by just 28 seconds on corrected time.

“We got our start right, taking the right-hand side of the first beat,” said Velsheda tactician Tom Dodson.

“We weren’t a 100 percent sure about it but we were pretty sure that side would work out, and then we saw a couple of the locals going that way, so we felt pretty good about that.

“I don’t expect any more races like that to be honest, our performances with Svea are pretty much identical. We are now racing the general fleet and not just Svea – we quite like the ORCsy format and the boats we are racing are all well sailed, and Svea is certainly one of those.”

Dodson added: “It was a bit of a leaders race I would say. We got the decision right to take the right-hand side and after that it just looked better and better.”

The entire Superyacht Cup fleet took on a course around a sun-soaked Palma Bay in a light but steady breeze.
The ORCsy handicapping system showed its value in providing a level playing field on a number of occasions. In Class A Highland Fling demonstrated her racing pedigree to win by almost a minute and a half on corrected time ahead of Saudade after two and a half hours of racing, with Win Win only 23 seconds further back.

The closest contest though came in Class C, with Silencio getting the better of Bolero by just 12 seconds with Aquarius third. Meanwhile, Scorpione of London took Corinthian Class D honours ahead of Q.

After racing, competitors celebrated a great day on the water and enjoyed the North Sails Happy Hour followed by the Paella Dock Party at Jack’s Club by St Regis.

Racing at The Superyacht Cup Palma continues tomorrow and Saturday. 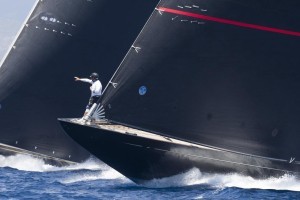