Any early concerns over the wind evaporated as Palma’s ever reliable sea breeze kicked in to send the 16-strong fleet off to a flying start in a steady 10 to 15 knots.

Renewing their now three-day old tussle, Svea and Velsheda were again unique in the staggered Superyacht Cup starting sequence in sharing a line, with Svea taking a narrow advantage for the second day in succession as the gun sounded.

However, after more than two hours of racing the venerable Velsheda would be ahead of Svea by just 14 seconds on corrected handicap time, though behind her on the water.

Racing in The Superyacht Cup Palma’s large and diverse Class B, Velsheda is now second overall behind the 45m ketch Mari-Cha, with a fourth place today to add to her class win of yesterday. Svea sits in fifth place though only a point away from third spot overall.

“We didn’t have a bad start, but we didn’t convert our plan as well as we wanted to, so we were behind Svea at the top mark and there weren’t really any passing points after that,” said Tom Dodson, Velsheda’s tactician.

“You won’t get many crew errors or tactical mistakes on either of these boats, and we don’t expect them to make any on Svea.

“Both owners are steering their boats and the crews just enjoy it that the owners are getting a buzz doing their own thing."

“We are looking forward to tomorrow. If it is like today I would say Mari-Cha will win, but if we get more windward-leeward work the Js might, and maybe us.”

The extra five knots of wind around the course added spice to an already indulgent feast of sailing, with the battle lines now firmly established on the route to deciding the contenders for winner of Europe’s largest and longest-running superyacht regatta.

That said, the close contest in Class A saw all three hard-charging boats in lockstep around the course with Win Win first today but level on four points with both Saudade and Highland Fling.

As former winners of The Superyacht Cup and class winners last year, the Win Win crew will be aiming for another strong result. Win Win’s skipper Ryan Taylor said: “We are based here, so The Superyacht Cup Palma is a pretty special event for us.”

In Class C, the majestic 56m Athos made the most of the bigger breeze to win the day. However, Silencio added a second place to her first day victory to lead overall from Athos and Bolero.

And it was a case of trading places in the two-boat Class D, Q taking the win today ahead of yesterday’s winner Scorpione of London – as in Class A the two are dead level on points and anticipating tomorrow’s winner-takes-all finale.

Once ashore owners, skippers and crews enjoyed the Southern Spars Happy Hour and expended any remaining competitive energy in the Pendennis Paddle Board Challenge, which was followed by the invitation-only Owners’ Mid-Summer Barbeque at The St. Regis Mardavall, one of The Superyacht Cup Palma’s main partners.

Racing at The Superyacht Cup Palma continues tomorrow with the final day of racing. 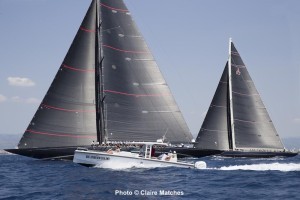