Eastern Hemisphere 2018, still no races due to shifty wind

Racing was cancelled again on Day 2 of the ISCYRA Eastern Hemisphere Championship 2018, organized in Trieste by Yacht Club Adriaco, with a fleet of 67 teams, from 17 nations.

Just like yesterday, the day started with a strong Bora (local wind from North East) blowing between 25 and 30 knots. The Race Committee was forced to postpone the start of the races. Later on, with a very surprisingly light wind two starts were given, but both races were abandoned on the first windward leg due to a big shift. In the afternoon the Bora started blowing very strong again, over 20 knots, and the PRO decided for the safety of the fleet that it would be better to call it a day.

The first warning signal is scheduled for tomorrow at 11.00.

Let's hope to get started with the 2018 ISCYRA Eastern Hemisphere Championship! 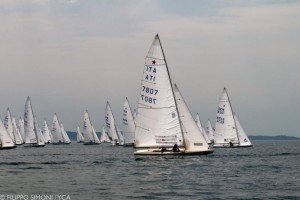