A cloudy, sunny and rainy day, with an east-north-east wind blowing first (Bora) and a north-west wind coming in later on, in the most changeable weather ever, the first three races of the Star Eastern Hemisphere Championship 2018, held in Trieste by Yacht Club Adriaco, were sailed today.

The Race Committee put a great effort into keeping the teams at sea for eight long hours until the sunset, in order to catch up the races that were not held in the two previous days. With just one more race tomorrow the championship will be valid, and in order to do so, the start has been anticipated at 10am. A fifth race could enable the discard, so the PRO will do his best to get it done.

At the top of today’s ranking after three races stands the Italian team Diego Negri-Sergio Lambertenghi, who clinched a first, a second and a fourth place, followed by two USA teams: Augie Diaz-Bruno Prada (2-5-3) and Jack Jennings-Frithjof Kleen (4-1-11).

Great satisfaction for Trieste’s team Michele Paoletti-Matteo Nicolich, who won the third and last race today at sunset. In the overall ranking they are 25th, penalized because they were disqualified due to an early start in the first race. Paoletti-Nicolich really hope that tomorrow two races will be held in order to discard their worst score. 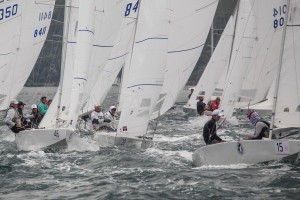 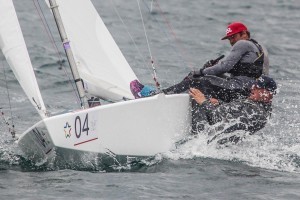