A nice breeze finally made its appearance on the Choptank River on day three of the 2018 Star World Championship held in Oxford, Maryland, hosted by the Tred Avon Yacht Club. Two races were completed by the 62 boat fleet but only one can claim the traditional daily prizes: reigning World Champions Eivind Melleby (NOR) and Joshua Revkin (USA) took both bullets, and let everyone know they’re not ready to hand back one of the most prestigious trophies in sailing. Brazilian Olympic Finn sailor Jorge Zarif with crew Guilherme de Almeida are following the lead pair in the provisional ranking, and in third place, 1988 Star World Champion Paul Cayard (USA) with crew Arthur ‘Tutu’ Lopes (BRA).

“We have to keep doing more of what we did today and we should be pretty good," said a very satisfied Eivind Melleby back ashore. "We like the race area, it’s nice and shifty. Today we had a little bit stronger wind than we expected and it was building throughout the day. It was a very tough first upwind in the last race. We thought we were going well off the starting line with no problems then we got caught in the middle of the race course when the others on the left hand side were having a big lefty that never made its way to us. We did most of the climbing back in the first run downwind by staying in the pressure in the middle and we were fast. It’s our downwind speed that keeps us out of trouble. We made all the gains downwind today.”

In Race one Melleby and Revkin, after a good start, were the first to round the weather mark followed by Argentinian Hector and Hugo Longarela and by the Brazilian Olympic Finn sailor Jorge Zarif with crew Guilherme de Almeida. They rounded in the same order at the downwind gate, however, in the second upwind, Danish Jørgen Schönerr and Jan Eli Gravad made their way into third by staying on the left side of the racecourse, which was the most favorable throughout the day. On the last long downwind of race one, the top three positions were confirmed and Melleby and Revkin could celebrate their first win. The happiest skipper of the three was 26 year old Brazilian Jorge Zarif, who finished second place his first race in a Star World Championship today even if he doesn’t get to sail the Star very often due to his Olympic campaign in the Finn class.

“We managed to have two decent starts and we did well" said Zarif. "Unfortunately we could not keep the lead in the second race but overall it was a good day and we are happy. The Star is great and the guys in the fleet are also great. It’s always nice to sail at this high level and its really fun. The Star World Championship is six races long and has a large fleet, so our strategy is to try to be consistent and finish in the top 5 to 10 in each race. I hope we have more wind like today for the rest of the week so I can continue to work the boat in the breeze because I feel more familiar with this condition.”

The second race started shortly after and the competitors had an extra element to take in consideration now: the current was flowing in the bay at a pace of 20 meters per minute. This is what tricked Diego Negri/Sergio Lambertenghi (ITA) and Jorge Zarif/Guilherme de Almeida (BRA) at the second upwind mark. While they were high on the lay line fighting the current which was perpendicular to the wind direction, Melleby/Revkin tacked early and could stay a little lower to take advantage of it. The Norwegian/American duo kept the lead through to the finish line and were followed by Paul Cayard (USA) with Arthur Lopes (BRA) in second, then the Brazilians Zarif/de Almeida in third place. The three teams are sitting first, third, and second respectively overall after two races.

“Finally the event got underway and it was nice to have some breeze. Everyone was getting a little antsy after a couple of days with no sailing," said Paul Cayard. "For us it was nice to get the rudder sorted out yesterday, it was preventative maintenance and we weren’t sure it was going to break, but I think it was a prudent thing to do. We are happy with the day, our speed is pretty good, and we were fast up and down wind. We could have won the last race but ended up losing by a few meters to Eivind. But there’s still a long way to go and it’s certainly not over. We’ll try to stay consistent and keep our heads up as this is a very tricky place.”

Two races are scheduled for tomorrow, Wednesday October 11th, with the first warning signal at 11,00.

Top ten teams in the provisional ranking after two races: 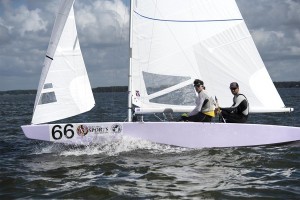 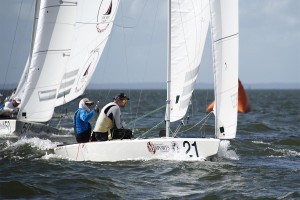 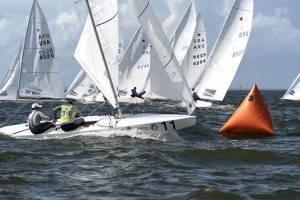 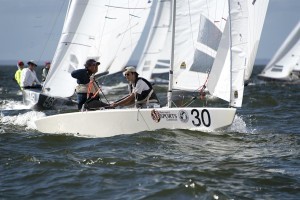