Day four of the 2018 Star World Championship in Oxford, Maryland, started with rain, a great 14 knot breeze from north east and choppy sea, all caused by hurricane Michael making its way up north. The flags of the 12 nations representing the 62 teams waved vigorously while the teams got dressed in their wet-weather gear and docked out towards the racecourse.
The mischievous breeze didn’t last through both of the races sailed today, and had died down to 6-8 knots by the second start of the day. Near the end of Race 4 the wind dropped even more on the last downwind leg after shifting of almost 180° and forced the competitors to finish going upwind. Today’s bullets go to Jorge Zarif with Guilherme de Almeida (BRA) conquering the windy third race of the series, and to Paul Cayard (USA) with Arthur Lopes (BRA) for the tricky fourth one.
Both names occupy the top spots of the provisional overall ranking, with Zarif/de Almeida leading, followed by Cayard/Lopes in second and Hubert Merkelbach and Markus Koy in third.

“We did a great job together setting up the boat for the conditions which we watched closely yesterday and today - declared Arthur Lopes - Knowing the wind was dropping all day today we focused on always tuning the boat for the changes and talking to each other about the other boats on the race course. I push Paul pretty hard to make sure I know what he wants to do and hear from me. We do a great job and we are always on the same page about what the next step is.”

Race three began with a frenzy and the fleet was eager to start in the newfound windy conditions, so eager that the Committee hoisted the black flag after two general recalls for the third start attempt. Augie Diaz (USA) with Bruno Prada (BRA) had a good start, were first to the weather mark, and then stayed on the left side of the course. They confidently rounded the left mark at the downwind gate in first place. Zarif/de Almeida followed close behind rounding the right one instead, then tacking to the left to grab the lead half way upwind. The Brazilian duo kept their lead to the finish and won their first bullet of the series. Behind them in second Eivind Melleby (NOR) and Joshua Revkin (USA) crossed the line followed by the Danish Jørgen Schönherr with Jan Eli Gravad in third. In this race the Norwegian/American team got DSQ by the jury after protesting the Brazilians Zarif/de Almeida for not avoiding a collision which resulted in damage (rule 14).

"We started with a good 12-14 knot breeze in the first race then slowly throughout the day the wind died more and more - said Jørgen Schönherr - in the second race today we were leading at the weather mark and we were top three around every single mark but on the last leg the wind died and shifted to the right and we lost about 20 boats then the wind died completely. We finished 3rd in the first race and we were happy with that. We have a good all around speed both up wind and down wind and we try hard to be conservative. Most of the time today the left was favored going upwind. On the last upwind we could see dark clouds near by and feel the weather changing so we decided to protect the right side a little more to be conservative. We work hard to get a free lane where you have clear air. That is the most important piece to us."

With hurricane Michael in the picture, the second race of the day started off with very different conditions. Light breeze and strong currents pushed by the hurricane made their way into the bay. After a general recall, PRO Bill Stump immediately hoisted the black flag yet again. That didn’t stop the whole fleet from taking a risk and piling up all together in the pin end of the line then staying on the left side of the course. Some fresh faces showed up first at the upwind mark, like the locals Allan Terhune Jr with Ian Coleman (USA) and the Argentinian Fabian MacGowan with Ariel Simonet shortly behind the Danish Schönherr/Gravad. The three teams lead the fleet moments before the wind started to slowly die and shift on the racecourse. The first downwind leg was a bit of a gamble with a 25° right hand shift but Class President Hubert Merkelbach with crew Markus Koy played the shift right and took over the lead. A few course changes later and a tricky last downwind that actually finished with the fleet sailing upwind, Paul Cayard and Arthur Lopes crossed the line first with a respectable margin over Merkelbach/Koy in second, then Tomas Hornos with Pedro Trouche (USA) in third.

“In Race 4 we started in the middle part of the pin half of the line - Allan Terhune told us - Our whole goal was to start and be able to go straight as long as we could and it worked most of the time. Then the next step was to figure out how to line up for the pressure coming down the course. That strategy worked well even in the last run until we didn't line ourselves up with the new pressure very well. We got into the most trouble when the wind died and shifted about 90 degrees on the last 1/4 of the leg. It was surely painful for us to watch but we still sailed a great race and we're really happy. We were going much better than we were yesterday and for only our 5th day in the boat together this year we got about 9th in the first race and had the chance to win the second race so that's great for us. Of course we're bummed it didn't work out in the end, but still a good day.”

The 2018 Star World Championship is now back on schedule with 4 races completed and the weather forecast is looking good for the next couple of days. The tail of hurricane Michael should hit the area overnight tonight and leave a nice wind to sail race five tomorrow with a scheduled start at 12:00. The Championship should end on Saturday October 13th with the sixth and final race.

Top ten teams in the provisional ranking after two races: 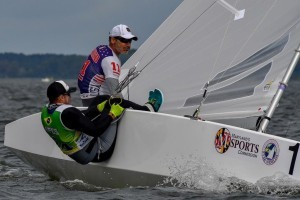 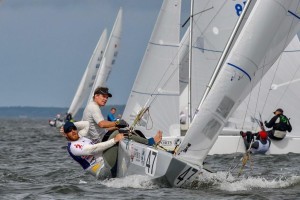 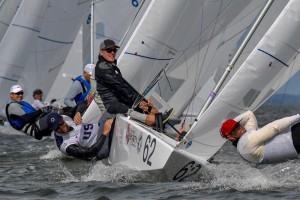 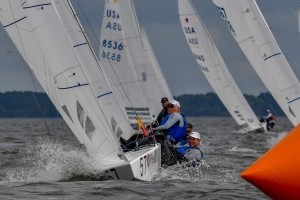 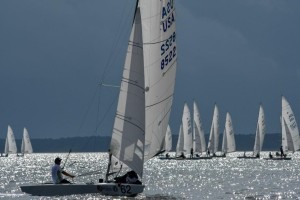 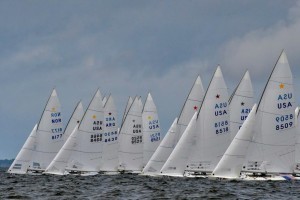