Naples and the Reale Yacht Club Canottieri offered their most beautiful conditions to the champions of the Star class, engaged from today in the Eastern Hemisphere Championship. It was a great first day in the Gulf of Naples. Clear skies, a ten knot Grecale wind, two clean races with regular starts: ideal for sailing.

The best of the day is the world champion Diego Negri, who, with crew Sergio Lambertenghi, won both races, taking immediately the head of the overall ranking. In second place another Italian world champion, Enrico Chieffi with Ferdinando Colaninno: the recent Italian Open champions bring home a fourth and a second place of the day. Third are Marin Misura and Tonko Barac on Croatel Two from Croatia (5-3).

"We are happy, we wanted to start strong, and it went well," comments Diego Negri. "The conditions were spectacular, we sailed at our best with gusts up to 16-18 knots. The second race was more complicated because there were streaks of air coming in from left and right, but we interpreted the pressure well and brought home the result. The parterre is of a high level, it was important to be in front".

On Naples and the Circolo Savoia: "Here I won my first Italian Laser championship - recalls Negri - the race course is similar to Liguria, where I live. Then the organization from the sea is super, the context is spectacular with the gulf, the beautiful city and the hospitality of the Circolo Savoia that has opened its doors with enthusiasm. On the way back, pizza party on the quay: "In fact nobody wanted to leave", jokes the world champion.

Tomorrow, from midday, the third and fourth race. 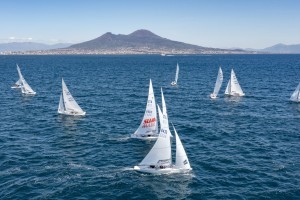 Great conditions for start of 2022 Alpen Cup at Torbole

The 2022 Star Estearn Hemisphere Championship coming to an end

Negri and Lambertenghi are the 2022 Star Eastern Hemisphere Champions