Strong winds kept the Star fleet postponed ashore, before easing enough to get race 4 underway at 1509 hours in 18 knots with some gusts up to 25 knots.

The race played out dramatically in the roller coaster conditions, with some thrilling downwind planing, a few dicey mark roundings and a lot of fun. Broken masts ended racing for several teams, including Mateusz Kusznierewicz (POL)/Bruno Prada (BRA) whose race wrapped up in the second downwind.

"It has been very tough, cold and windy," commented Negri. "It was a very good regatta for us, we catch up from 10th and played for the top 3. Just a little shift at the very end we missed the podium for the race. But it is ok, we are still leading."

"I don't know how many litres of salty water I drank today, but it was great fun sailing," laughed Lambertenghi. "With the big waves, going downwind was super, super fun."

Four races down and four different winners, evidence enough of the calibre of teams competing. The leader board reads like a who's who of sailing talent, with plenty of World Champions, Continental Champions and Olympic honors. Just two more races to crown the 2022 Star World Champions and there is plenty of unfinished business ahead. 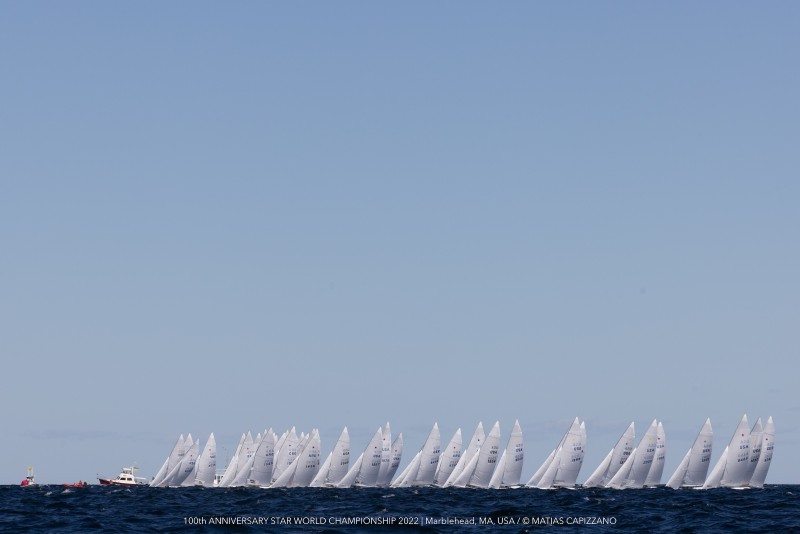 World Champions Outrun and Outclassed
Lawrence/Macrae took victory with a mass of Star World Champions hunting them down. Lawrence, the 2019 Star Junior World Champion, and Macrae were settled in their mode and thrilled to seize the win and rise up the leader board on such a challenging day.

"We started kind of in the middle of the fleet, which is not my normal tactic or routine, but it seemed like the breeze was steady enough to be able to pull it off," said Lawrence.

Playing the left-hand side of the course opened the door to round the first mark in third, from where they launched their assault, picking off Doyle/Infelise on the run and closing the gap to Jennings/Trouche, before putting the hammer down to take the lead on the next upwind.

"We always had Cayard and Diego and Eric, and those guys were always right there within shouting distance," continued Lawrence. "It was a little hairy downwind at times. This boat likes to light itself up and sail like a dinghy, so it was the perfect conditions for it."

"The downwinds were just unbelievable," added Macrae. "It was a full send!"

"Windy sums it up," grinned Fritz on the day's exhilaration. "It was fun. We tried to fight our way back, we got up a couple of boats."

Despite a poor start, the pair still lead the U30 and even finishing in today's conditions should be considered a good result.

Ambrosini continued, "The day was pretty tough and pretty long. It was very physical, but we are here for this and now we will enjoy the evening."

The leader board fight is now finely balanced for race 5 and with the discard coming into play tomorrow it will be a challenge for control. Race 5 is scheduled to get underway at 1130 hours on Friday, September 16.