The final practice race was held today for the 116 competitors for the RS:X Windsurfing World Championships at Sorrento Sailing Couta Boat Club (SSCBC) in Sorrento, Victoria, before the competition gets underway tomorrow.

Competitors representing 31 countries have made Sorrento their home over the past few weeks, welcomed with open arms by the SSCBC Members and the local community. The Club has provided competitors and officials with a temporary membership of SSCBC, enabling them to use the sailing and dining facilities in the lead up to and during the Regatta.
With over 60 volunteers running the Regatta, from measurement and registration to race management, first aid and even providing local accommodation in homestay arrangements, competitors have felt very welcomed.

Measurement and registration were held all day yesterday and was completed today at midday.

The official Opening Ceremony was held yesterday at 6pm and attended by many of the competitors, officials and supporters. Commodore Graham Cunningham welcomed competitors, followed by Ilker Bayinder from Turkey, RSX Vice President and Gavin Wall, Australian Sailing, Regional Manager – Victoria. Interestingly, this regatta marks the 35th National or Worlds competition hosted in Victoria this season, and we are thrilled to have 31 countries represented here at Sorrento, many of whom are vying to secure their spot for Tokyo 2020.

Stefania Elfutina from Russia was a bronze medallist in Rio having just graduated from the youth fleet back then, and is older and more experienced now and has already qualified for Tokyo, so the pressure on her is reduced here. “This event is very important for many countries for selection but for me, I will enjoy and try to do my best” said Stefania.

Tom Squires from the UK is in a similar position, with qualification completed and already a spot on the team, so a podium finish is his goal. Tom has not made a podium finish at a Worlds before so is applying personal pressure to do well here this week.

The male competitors from the Netherlands are competing head to head for a spot on the Dutch team: Dorian Van Russelberghe and Kiran Badloe. Dorian is a dual Olympic gold medallist with significant experience at the top when it counts, but his younger training partner Kiran has been consistently getting stronger and more competitive and is currently the reigning World Champion. Kiran has been in NZ since November and arrived in Sorrento on 2 February to start his preparation for this event. We have two days of qualifying coming up to decide who will make the gold and silver fleet, so we will wait and see how this friendly rivalry will pan out this week.

Closer to home we have two Australian women and one from New Zealand fighting it out for the Oceania qualifying spot for Tokyo: Courtney Schoutrop (AUS), Amelia Quinlan (AUS) and Veerle ten Have (NZ). Courtney, aged 21 years old, has been sailing an RS:X for nearly four years, having started on a Techno. Veerle has been training at Sorrento for around five weeks so we’ll see who has more experience with the wind and tide conditions once the competition commences tomorrow.

The Australian men have the numbers on the Kiwis, with five Aussies competing versus one New Zealander, but again, they’re all fighting for the one Oceania spot for Tokyo.
Practice racing was held today, with the official start of the competition commencing Tuesday afternoon. 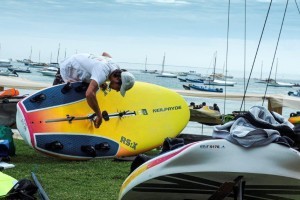 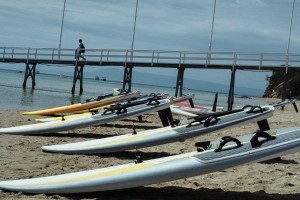 Inclusion World Championship for Sailing: Gold for Basedow and Löschke

Inclusion World Championship for Sailing gets underway in Rostock