Gargnano (Lake Garda) - Closed the World Championships (and Europe) of the Australian boat Wazp and the stage of the Itaca Therapy Project, the Circolo Vela Gargnano now focuses on its "September Sailing" that will start in the first two weeks end of september 2017 with Gorla trophies and 67th Centomiglia, the lake tour on 9-10 September. Also last week, the Gargnano Club teamed with Campione Univela Sailing in the organization of the Waspz World Championship, the boat of just 3 and a half meters, One design of Moth, event supported thanks to the Lombardia Region's contribution. Now Gargnano and Garda are close to the Centomiglia, which with its 67th edition is the longest regatta in Italy. On September 2 will be the challenges (in the afternoon) with the Ocpoint Trophy (the former Super G), the 3rd will be the turn of the 51st Gorla (start 8.30 am from Bogliaco), week performances of boats and boats, music And parties in the square with East Lombardy and Pro Loco Gargnano, on the 9th and 10th round of the lake. To close the big summer on September 16-17, the 11th edition of ChildrenWindCup will be launched, hosted by the small patients of the Oncology pediatric hematology departments of the Spedali Civili-Brescia. 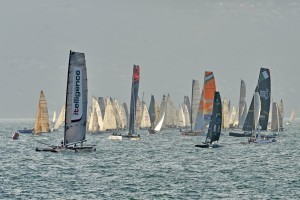 International competitors look back at the 2017 Rolex Fastnet Race