18 Classic Swan yachts, from the renowned Swan 36 (the first model built by Nautor’s Swan), to the larger Swan 76, during 3 days of costal races, have shown their elegant yet timeless lines designed from 1966 to 1978 by Sparkman & Stephens studio.

Sparkman & Stephen fleet, from all over Europe, have sailed in the name of elegance and tradition in the waters of one of the most enjoyable racing courses in the Med, thanks to the ideal wind and weather conditions of the area and its breath-taking scenery.

The races of about 15 nm have taken place in the Gulf of Follonica, touching the Elba Island coast. Cerboli, Sparviero and Palmaiola islets have been the perfect scenario for S&S yachts.

Several prizes have been dished out: Swan 65 Venator (Emma Sims-Hilditch) won the ZEPPELIN TROPHY as the most elegant yacht; the ROD & OLIN STEPHENS ROYAL THAMES YACHT CLUB CHALLENGE TROPHY, for the best result overall, has been achieved by Swan 36 Josian (Eugenio Alphandery); the STEFANO CIONI TROPHY was awarded to the first line honour boat and it went to Swan 65 Venator (Emma Sims-Hilditch); meanwhile the SPIRIT OF S&S SWAN RENDEZVOUS has been awarded to Swan 48 Age of Swan (Martin Goerke). Martin was strongly committed to take part to this rendezvous, and he faced such a long trip from Baltic Sea to Tuscany, mostly sailing on his own. During the prize-giving he wanted to point out that he was never alone, but he was with his Swan!

The event is organized by Club Nautico Scarlino, under the supervision of ClubSwan. 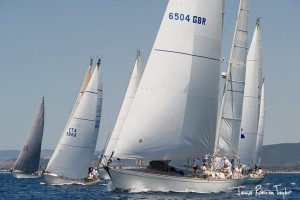