“Designing is all about the details, about the feeling you get when you touch, when you hear, smell and look at the end product.” What matters is the feeling you get when you experience it. Designing should be more than just about the visual aspect of things, and possessing a cradling thought behind the design itself, rather than an imagery or an object for it all to be based on is crucial for the idea to have spirit.  Bearing these thoughts while designing lets the whole outcome to be based on the idea, the thought and the dream... All other visual aspects, sleekness, beauty and the rawness of it must come added on top of the core idea that the whole design is meant to be built on. Seeing things from this point of view, the lack of variety regarding style and design in the yacht designing market has given birth to the ground for the idea of Barrell to emerge. '

While designing the thought that hurried up along my mind was that the piece had to be timeless as much as it had to be a classic and a modern piece all crumbled up into one. Modernism, though has an upbeat sound to it, has its own limited timeframe to be relevant. A classic piece, therefore, has the luxury of being relevant for limitless periods of time. For a design to have the possibility of being a modern and a classical piece at the same time, the definition of an already existing yacht style was not covering the whole idea. Along with the thought of modernity, classical and sleekness had to come the perfect amount of power and speed to complete it to perfection as well as the ability to come to life. Each detail was thought as if the production was to be started thereupon. She, equipped with three engines totaling to 7.500 HP, provides the speed desired from cruising along to reaching a destination in time. Barrell, aiming to be the most powerful and the fastest yacht in her category incorporates maximum comfort and technology with strong classic lines that could also be called ‘Muscle Yacht’”.  The design; a classi-modern and aggressive touch applied to an avant-garde design infused with raw power. The aim; joy, comfort, blended with quality and class.

Barrell's 20 meters long body is made out of aluminum to make her firm and cool hastily. With her air intakes on each sides for the purpose of keeping her engine room and the engines cool, safety is emphasized as much as comfort and speed. The chrome air winglettes added, 3 on each side, accentuate the direction of air intake followed by an autonomous compression. With this feature the engine room is constantly cool. The air and exhaust outlets placed on each of the transom aid the dispose of hot air.  The unique double platforms that are placed on the transom can be closed and secured while cruising and opened while floating aloof, as desired. Transom door opens and descent to make way for a flat platform to automatically slide out to make way for easy passage.  The lights on port and starboard are also used as navigation lights and upon exceeding 50 knots of speed the lights turn red.

Covered by a soft nonabsorbent-closed cell, her deck provides effortless cleaning. On board behind the captain seats, she has a hidden countertop for galley purposes. The entrance on the right hand of the console was designed to keep the shape of the console intact and to fold instead of sliding. Moving onto her interior, she is conquered by luxury as well as comfort and state of the art technology. Her elegant interior consists of a saloon, a master cabin, two guest cabins, galley, and two bathrooms. With a fully massive touch screen on the console to control everything on boat she is designed to be user-friendly and  also have another touch screen on the top of the stairs to control her smoothly while docking and can be used as the tv to watch while sunbathing.   Her cutting edge sleekness offers up to 12 passengers the joy of being on top of a sophisticated machine.

Experienced in designing vessels ranging from a mediocre 7 meter available to an average Joe to an upscale mega yacht, Baran was already educated in the areas of architecture and industrial design in the U.S. when he decided to move to Italy to add yacht design to his résumé.  He has been actively designing and managing from mass production boats to custom design yacht  projects since 2013 in his company Baran Akalın Design. 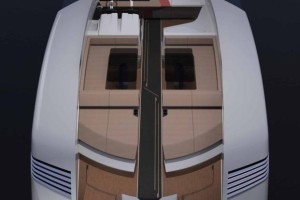 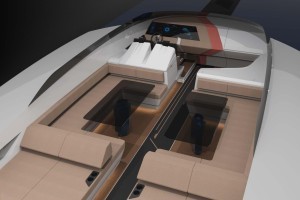 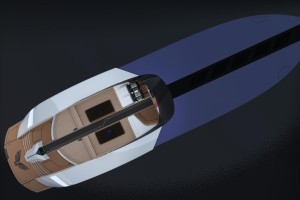