Leaving the CDK Technologies yard: the 60-foot monohull CHARAL ready to head out to sea!

Summer 2017 – Start of manufacture of the hull and deck moulds in Spain and the UK with the CDK yard’s historical subcontractors.

Yann Dollo: “Clearly we, the yard, get the ball rolling and we start to set to music a work, which had already begun at the design office stage. At that point, a long and painstaking job begins. You need to reserve the raw material required from the subcontractor and we begin to finalise various pieces of tooling. For us, symbolically, it’s the launch of the project, even though nothing is yet set in stone in our game.”

October 2017 – Receipt of the two split hull moulds at CDK Technologies, start of laying up in the latter and the first cooking process

Yann Dollo: “We are 100% operational since the split hull moulds, which come from Spain via wide load, are physically with us in Brittany. It’s then a question of starting the laying up of the hull. That involves laying up the folds of materials in a succession of different stages according to the plans. Next, we put the whole lot in the vacuum oven. Each cooking phase is followed up with an ultrasound test.

For its part, the British service provider does the same thing to the deck mould, which is due to be delivered to us in January 2018.

At the same time as the manufacture of the hull and deck in their moulds, the overall structure is defined. We position the bulkheads and the ballast tanks. The optimisation is constant between the yard and the teams from the design office until, little by little, one detail at a time, the parts are fixed in place. At no point at the start of the project do we receive a bundle of plans. Together, we seek out the best possible solution and we’re constantly optimising. That’s part of what makes our work so thrilling. It’s the DNA of our sector: adaptability for maximum performance.”

March 2018 – Releasing the hull from the mould, an important moment shining a spotlight on the technology involved in the ‘Made in CDK’ construction and cooking process

Yann Dollo: “It’s the big reveal. Back in March, we discovered what Charal’s hull looks like from the outside. That moment in time is a very important stage for the whole of the CDK team.

At that point, we discovered a very special, characteristic, honed shape in relation to the previous generation IMOCAs designed specifically for sailing with foils.

Beyond the satisfaction of the teams at CDK, this equates to little additional finishing off work and hence less weight.

This came as a real boost to the team at a time when they had already put a lot of work into the project.” 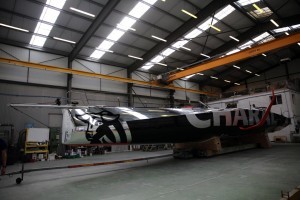 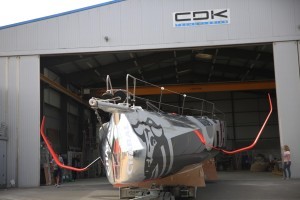 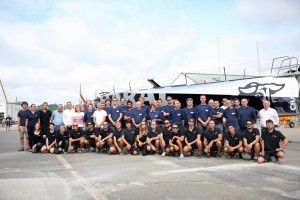