Can Can, a Finnish yacht in the Mediterranean

Can Can, a Finnish yacht in the Mediterranean

Can Can is a 12 meter mahogany sloop, built in Finland in 1966 and designed by the Swedish naval architect Arvid Laurin. After 50 years and several owners, she has made her new home in the Italian northern Adriatic. Can Can has undergone a series of repairs and improvements at the a yard in Monfalcone, readying her for sale.

Can Can, from Finland to Trieste

Launched in Finland in 1966, during her first season she won nine out of her first ten races. The following year she was selected for the combined Swedish-Finnish Admiral’s Cup team, reaping an excellent fourth place in the 1967 Fastnet Race (the current owner’s father was part of the crew!). Owned by a Finn, two Swedes and an Austrian over the years, Can Can, a 12 meter long Marconi rigged wooden sloop, is presently sailing in the northern Adriatic off Trieste and Monfalcone.

Can Can was designed by Arvid Laurin (1901-1998), a well known Swedish yacht designer, winner of the silver medal in the Star during the 1936 German Olympics. With designs for 5.5 and 6 Meter Rule yachts and a successful international racing career covering more than 60 years, Italians call Laurin “The Sciarrelli of the Baltic”. He also designed the offshore ketch Aprilia and in 1961 the 16 meter Anahita. Under the RORC rule, Can Can was rated as a 2nd Class and her name was changed several times. In 2012 she was bought by the present owner, who had finally found the boat his father raced so many years ago.

Can Can’s lines come from a historically important period of transition in yacht design. In 1965 when Dick Carter designed his light displacement Rabbit, he gave her a revolutionary spade rudder and fin keel that helped her win that year’s Fastnet. This wasn’t the case for Can Can with her full keel, the result of centuries of traditional design, where the keel and rudder were a single element. This makes Can Can both sturdy and seaworthy. Built entirely of wood, with 22mm mahogany planking, her interiors are elegant and well laid out, with standing room under the coachroof and it’s beautiful deck beams. A large foredeck hatch and wide side decks give easy access to the foredeck. The cockpit is protected by a robust combing that faces the stern locker with it’s ample storage space.

In 2012 Can Can was brought to the Alto Adriatico Custom shipyard in Monfalcone as Drabant and given her original name once more. The AA Custom yard is a spin-off of Cantiere Alto Adriatico, builders and re-fitters of wooden yachts, directed by Odilo Simonit and Paolo Skabar. Work on Can Can included repairing the solid mahogany transom, mounting a second bilge pump, modification of the water discharge system, a new engine battery and repairing the autoclave. For the interiors, a new bulkhead in the head, new mahogany veneer for the chart table and new trim for the cabinet doors under the companionway steps. Deck, cockpit and hull were all stripped down to wood and completely repainted with a special oil based paint for a beautiful finish. New projects have been scheduled each year, starting with the removal of a portion of the old deck and its replacement with a new double layer of Khaya mahogany plywood, painted white with a no-skid finish. Then the cockpit was restored to it’s original design, with the exception of the mainsheet traveller (Harken) which was brought forward of the wheel. A cowling for the instruments on the steering pedestal was also made. The engine control cables and instruments were replaced, the spray-hood modified, and a new removable mahogany plywood table for the cockpit was made. The original aluminum mast and boom were replaced with carbon yards, and all the standing rigging was renewed. The new yards and rig were made by the Hungarian firm Pauger Carbon Composites. For better light air performance, Can Can’s carbon mast is 90 cm longer than the original, the boom 80 cm.

Can Can – Tech Specs 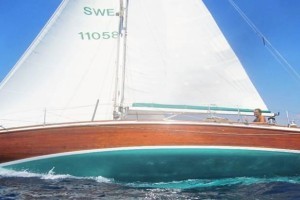 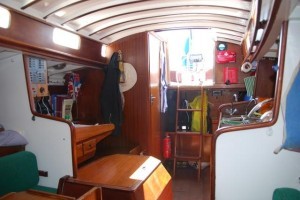 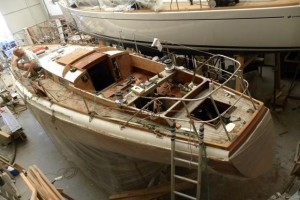 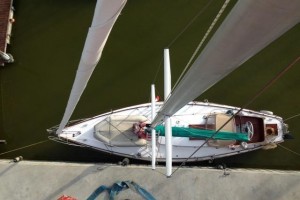 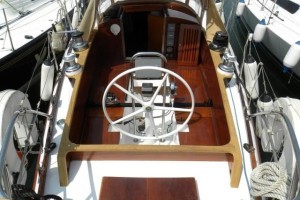 The SW96 Sorceress has achieved a fantastic result

L'Eté, a new daysailer presented at Boot in Düsseldorf