After the double win in the Fujairah event, first stage of the 2018 UIM XCAT World Championship, Arif Al Zaffain and Nadir Bin Hendi (on “Dubai Police”) also take the pole position of the Stresa Grand Prix, second event of the 2018 season. The fastest lap for the Emirati duo, today on Lake Maggiore, saw them preceding by 0.4 seconds The Blue Roo - Team Australia, with the Norwegians Pål Virik Nilsen and Jan Trygve Braaten. Third fastess are the Italians Serafino Barlesi and Alessandro Barone on “Yacht Club Como”: an all Italian team racing on an Italian boat in the Italian stage of the championship.

The procedures for the pole position in the afternoon had the teams engaged in 45 minutes of free practice (with their times not eligible for the definition of the starting grid). After 15 minutes of stop for the last technical checks on the boats, it was time for 15 amazing minutes of proper pole position: a breathtaking quarter of an hour with all the catamarans running on the course at the same time, in a challenge for the fastest lap. Dubai Police (catamaran endorsed by the Dubai Police force) closed at 2.26.962; Arif Al Zaffain and Nadir Bin Hendi are two "legends" on Lake Maggiore where they won powerboating races three times already in the past. After a head-to-head with Dubai Police, The Blue Roo stopped the clock at 2.27.370: an important result after some technical issues during the morning practice. Yacht Club Como closed its fastest lap in 2.28.661 and was among the first to get in the water, clear sign of the good shape of the Italian boat and crew in home waters. Abu Dhabi 4 will start fourth on the grid, followed by Swecat (Sweden) and New Star (Russia).

Tomorrow - Saturday - at 3 pm CET the green flag will start Race 1 of the Stresa Grand Prix - 2018 UIM XCAT World Championship. The 12 teams will compete along a 3.32 nautical miles course (just over 6 km) to be repeated 17 times (including start lap and two long laps). The background will take its share of awe, with the boats speeding between the world-known Isola Bella and Isola dei Pescatori. Sunday at the same time Race 2 will duplicate the thrill.

The catamarans, powered by two low-emission engines manufactured by Mercury, for a total of 800 HP, are capable of speeds in excess of 200 kph (125 mph).

The events will be streamed live through the Championship social networks, with English comment, with the broadcast starting at 2:40 pm CET. 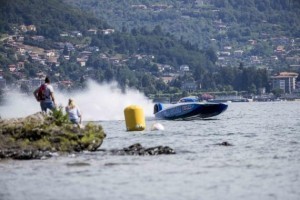 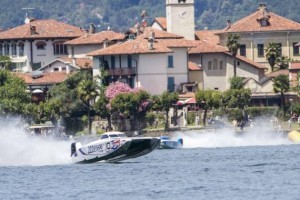