Not just action, but a roll over, a long yellow flag, penalties and a retirement for the championship leaders: in the end the winners of a tough race are Team Australia, followed by Abu Dhabi 4 and Hi-Performance Italia.

Everything happened in today's race, during the Shanghai stage of the 2018 UIM XCAT World Championship.
The start saw Team Australia of Pål Virik Nilsen and Jan Trygve Braaten keep the lead, while Abu Dhabi 5 stepped up from P4 to P2 followed by Dubai Police and Abu Dhabi 4 (down two positions after the green flag).

After some long-lap strategies, with the Aussies still in the lead but with both long laps still to take, boat 22 Videx suddenly rolled over, probably for a broken trim. No harms for Alfredo Amato and Dani Martignoni, but a red flag meant all the gaps were canceled.

The long restart procedure lasted no less than three laps under yellow flag, in a very tense situation. After the second green flag it could seem that the race was going to stabilize, but more twists were yet to come. Abu Dhabi 5 hit a buoy and incurred in a penalty lap, while Dubai Police of Arif al Zaffein and Nadir bin Hendi, actual leaders of the championship, broke a shaft and lost the propeller in the water.

A messy final part of the race ended with a win for Team Australia literally chased by Abu Dhabi 4 (Shaun Torrente and Faleh al Mansoori), who finished second by just three tenths of a second. MVP of the day goes to Hi-Performance Italia, with Francois Pinelli and Rosario Schiano (first XCAT race for the latter) closing third after a very consistent race, always staying out of trouble but fighting with faster boats.

A thrilling race was actually predictable after the morning qualifying, as many boats fought for pole position with gaps in the range of hundredths and tenths of a second.

The sudden stop of Dubai Police gives a boost to all the chasers in the overall ranking, in particular Abu Dhabi 4 and Team Australia, who have now the chance to close the gap some more tomorrow as Arif al Zaffein and Nadir bin Hendi will start race 2 from the back of the grid. 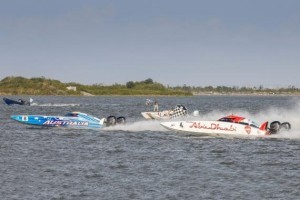 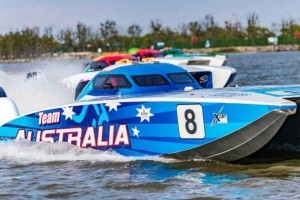