The two boats from Abu Dhabi Team lead race two in the sixth race of the season. #4 wins followed by #5, while third is HPI Italia.

Sunday's race, sixth leg of the 2018 UIM XCAT World Championship, was much clearer than Saturday's one. On the same race course on Dishui Lake, in Shanghai's Pu Dong district, no big twists happened today, in contrast to race 1 whose results have been sub-judice until this morning (below you can find the amendment to the results).

At the start Abu Dhabi 5 of Rashed al Tayer and Majeed al Mansoori kept the leadership, while their mates of Abu Dhabi 4 (Shaun Torrente and Faleh al Mansoori) were able to pass Team Australia(Jan Trygve Braaten and Pål Virik Nilsen) and get second spot. They started then to pull away from the Aussies, while from thee back Arif al Zaffein and Nadir bin Hendi on Dubai Police climbed back from P11 to P5.

A very good start for Hi-Performance Italia #96, piloted by Francois Pinelli and Giuseppe Schiano, was another decisive factor: the French-Italian duo were sixth on the grid but managed to overtake two boats in front of them, #46 ViniExport and #20 Yacht Club Como. From the very first laps boat 96 was in the fight for the top spots, even leading the race for some time.
Then the long-lap strategies from each team took its part, and at lap nine boat 4 got to the top spot, with boat 5 and 96 behind.

Team Australia in fourth and Dubai Police in fifth couldn't find enough speed to fully bother the top three but at at the same time they could hold their positions on the following boats of Kuwait, Swecat, Newstar. All the others had issues with their boats: ViniExport, Yacht Club Como and 222 Offshore finished P9 to P11, while Videx after the previous day's rollover were able to race but were hindered by an engine failure and crossed the line at half speed with a 3-lap gap.

Now the gap in the overall ranking between Dubai Police and Abu Dhabi 4 is narrowed to 20 points, with 35 at stake every race for the winner. Next weekend two races will take place in Hangzhou, 200 km southwest of Shanghai, and no less than five boats could be leading the championship in seven days from now: beside Dubai Police, there's two teams from Abu Dhabi, Team Australia and 222 Offshore. 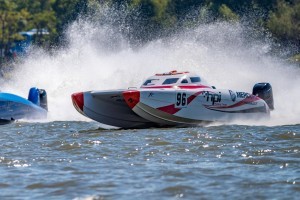 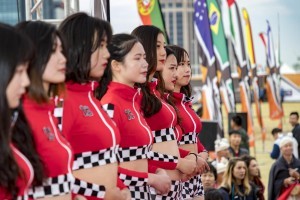