Dubai 13 December. After the morning's pole position in front of Sunset Beach, the first top spots were for the leading teams in the championship: P1 for Maritimo, followed by Abu Dhabi 4, Abu Dhabi 5 and Dubai Police.

It already means one thing: Maritimo of Tom Barry Cotter and Ross Willaton are 2019 Pole Position Champions.
A great achievement at their first full season in XCAT, but that's not the most coveted title at stake...

So, race 1 starts with some breeze and moderate chops, enough to disturb the drivers and get the boats airborne.
Come the first turn after the green flag, and in the middle of the pack New Star Racing flip over: it's red flag. No harm for Mikhail Kitashev and Dmitry Vandishev, immediately rescued by the Scuba Angels as the boat is towed to shore and the race commissioners call for a second starting procedure.

Which runs smoothly, although Maritimo have a bad start missing full power from the engines thus losing three spots. Abu Dhabi 4 take the lead followed by their stablemates and by Dubai Police.

A first, amazing battle happens then between Giovanni Carpitella and Darren Nicholson on 222 Offshore, who chase Tom Barry Cotter and Ross Willaton for the fourth place. They overtake each other a couple of times, but then the faster Aussie boat gets the better of the Italian/Australian one, and starts a run after the top positions.

Meanwhile in the front the two Abu Dhabi boats, with Shaun Torrente and Faleh al Mansoori leading on Rashed al Tayer and Majed al Mansoori, control the situation and play a smart strategy with the long laps. But Dubai Police in third are masters in the art of strategies, and with their long laps they're able to move up into second to the cost of Abu Dhabi 5.

Maritimo in fourth seem to go faster every lap, until they reach Abu Dhabi 5 and engage in one of the most thrilling battles of the recent times. Four laps shoulder to shoulder, with the former – apparently – slightly faster and the latter perfect in not letting any chance.

To add even more spice, Dubai Police gets ground on the leaders (still Abu Dhabi 4) and for a while it seems that they can even reach them and fight for the win. Until Arif al Zaffein and Nadir bin Hendi, with two laps to go, suffer a double engine issue and slow down...just to find themselves in the middle of the other battle between Abu Dhabi 5 and Maritimo.
The Australian duo master an amazing couple of laps, and are able to overtake both, while the Dubai crew lose also the position to their “cousins” of Abu Dhabi.

In the end, the checkered flag is for Abu Dhabi 4 in P1, Maritimo in P2, Abu Dhabi 5 in P3 and Dubai Police in P4.
Best of the rest is once again the crew of Giovanni Carpitella and Darren Nicholson on 222 Offshore, whose setup is not ideal for the water conditions.
Victory Team (Salem al Adidi and Eisa al Ali, 2017 World Champions) finish sixth, although they don't get any points as they race with a wild card. Behind them it's HPI Racing Team with Giuseppe and Rosario Schiano, and De Mitri (Roberto Lo Piano and Maurizio Carando). All the others are out.

The main point after such a thrilling competition is written in the overall ranking: the top four teams are still all eligible for the 2019 World Championship, with just one race to go. Abu Dhabi 4 now leads at 171, followed by Maritimo at 167, Dubai Police at 165 and Abu Dhaabi 5 at 139.

So, tomorrow the 2019 XCAT season will end with the second stage of the Dubai Gran Prix, a race that simply can't be missed.
The time is 3pm local time (GMT+4), with live streaming on our social channels.

Please find at the links below all the results,the overall ranking before the last race, and the links to XCAT social media. 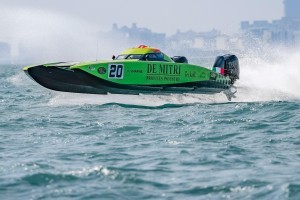 Francis Joyon has left Vietnam and is heading for China