Sarah Newberry & David Liebenberg (USA) became the first team to break the dominance of the Italian run of straight bullets when they won race 7, the first heat of today’s session. The Americans were expert at moding the catamaran into ‘high and slow’ mode or ‘full foiling’ low mode as and when the changing conditions and tactical game of chess demanded. USA 50 proved the race win was no flash in the pan when they followed up with a 2nd place in the next race, not quite managing to match the foiling pace and boathandling of Ruggero Tita & Caterina Banti (ITA) but still very impressive all the same. Tita & Banti had shown they were mortal in the first race of the day with an uncharacteristic 20th place. But bouncing back with two race wins means the Italians are scoring a perfect 8 points from eight races, discarding the 20th.

In the last race of the afternoon, Ida Svensson and Marcus Dackhammar (SWE) made the Italians work hard for the race victory, the Swedes only being overtaken at the final windward mark of the two-lap windward-leeward course. A 2nd place lifts the Swedish crew to 15th overall and gives them hope of making the Medal Race this Monday when the world titles and podium places will be decided.

Although Gianluigi Ugolini & Maria Giubilei (ITA) didn’t have the best of days, the young Italians hold on to 2nd overall with Sinem Kurtbay & Akseli Keskinen (FIN) in third overall.

How is it that you can have a bad day and come out leading the World Championships? When all your main rivals have an even tougher day. If Vilma Bobeck & Rebecca Netzler (SWE) were less than satisfied with their shaky performance, they now top the 49erFX leaderboard. It was an increasingly bruising day for the Swedes that started promisingly with a fifth place but followed with a forgettable 31st and 19th place. The consolation for the Swedes was that previous event leaders from the Netherlands, Odile van Aanholt & Annette Duetz, suffered an even worse outing with scores of 9,29, 25. The last race was particularly crushing for the Dutch after the reigning World Champions pulled off a brilliant port tack start from the middle of the line and were leading in the early stages. Such were today’s fluky, patchy conditions, no lead was ever safe and by the windward mark the Dutch were floundering back in the twenties.

Despite all the randomness of the racing, two teams showed the rest of the fleet the way round in the first two heats. A match race between Xiaoyu Hu & Xuebin Yu (CHN), and the Polish duo Aleksandra Melzacka & Sandra Jankowiak (POL), culminated in the Chinese taking a convincing victory, the first time China has won a race at a 49erFX World Championship.

In the next heat it was the same two crews who found themselves engaged in a game of cat and mouse, although this time it was the Polish crew who took the winner’s gun ahead of China. The Polish clocked up the fewest points across the whole day, lifting Melzacka & Jankowiak to 7th overall. Also very consistent were Alex Maloney & Olivia Hobbs (NZL) whose scores of 6,8,7 launch them to 4th overall behind Tamara Echegoyen & Paola Barcelo (ESP) in 3rd. Freya Black & Saskia Tidey (GBR) are a new British pairing who showed their future potential with three scores in the top three to raise them to 5th place overall. 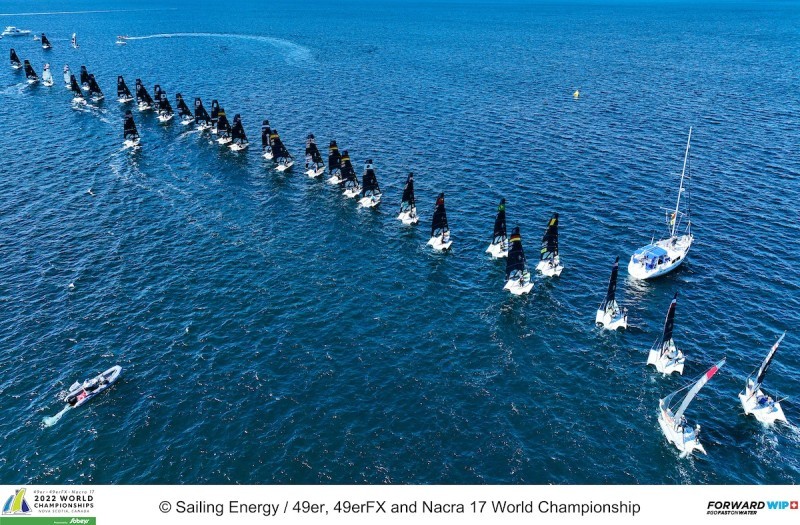 Hanging onto a top position in the overall standings in the 49er fleet today was like gripping a sapling on an eroding cliff as double digit scores plagued some top ten sailors who slid in the rankings.

“We struggled a lot with the starts,” said Diego Botin of Spain who kept second place overall, five points behind overnight leaders Lambriex/van der Werken. “Flo [Florien Trittel Paul] did a real nice trigger pull on the last start. It made us have a more relaxed race, but the first three races were all about finding lanes inside the fleet and positioning the boat.”

It was a luxury for the Spaniards to have a 30-point gap on the more than 20 teams struggling in today’s four races to qualify for the Gold fleet. The cut was made at 25th where the Uruguayan pair of Umpierre/Diz claimed the last spot. Protests are pending.

A notable team sneaking into the Gold fleet was Australians Burton/Hoffman in 20th. New 49er campaigner, Burton is an Olympic gold medalist in the men’s singlehanded Laser.

Immune from the tenuous holes and shifts today were the two Kiwi teams of Dunning Beck/Gunn and McHardie/McKenzie who rose to third and sixth respectively. Dunning Beck/Gunn won the day with a miraculous 6, 1, 8, 1.

The new Hanse 510: visionary revolution in the 50-foot class