Lead by Terry Hutchinson with Dean Barker on the helm, Quantum Racing closed out the regatta title with a seventh in an eventful final light wind race to win by five points over Platoon, the team which were second overall last year. Reigning season champions Azzurra, winners of the warm up PalmaVela regatta finished fourth.

It is the first time that Quantum Racing have won a 52 SUPER SERIES regatta since they triumphed at Quantum Key West Regatta in January 2017, the curtain-raiser to last year’s six-event season. Their victory in Croatia was built on excellent starting and strong first beat strategies, very solid boat handling and is also testimony to their accelerated optimisation and learning process required because they only sailed their new boat three days before early May’s Sail Racing PalmaVela pre-season warm up where they finished second to Azzurra.

But while they finished on top of the 12 boat fleet, which represents eight different nations, among the Quantum team there was some lingering disappointment that they were unable to hold on to all of the nine points margin they had when they went afloat this morning.

In the gentle sea breeze, Harm Müller-Spreer’s Platoon and Hasso Plattner’s circuit debutants on Phoenix escaped and were away around the first top mark in first and second as Quantum Racing rounded fourth. But Quantum uncharacteristically then dropped back to a seventh placed finish, their worst score of the week other than the eighth in the Coastal Race, in which they were over the start line too early.

Hutchinson was typically uncompromising about losing places today but confirmed that there was no shortage of motivation through what felt like an especially long winter because of their disappointing third last year.

“It was a long winter. Losing sucks.” The Quantum Racing skipper emphasised, “It never stops hurting. The moment it stops hurting I should retire. But it absolutely motivates you. We’re fortunate we have an incredible group of professionals, and everybody takes their job seriously, and I’m moaning about losing four boats downwind over the course of the regatta but we won the regatta. But, that said we never stop thinking about how we can get better.”

He paid a warm tribute to the Quantum shore crew for the hard work in getting the boat ready on time after a very short build slot and also to their sailing team for always keeping the boat fast.

You never hear a tactician say ‘well we were a little bit slow but man we were smart.’ No. Always be as smart as you are fast. They did great work.”

As the active racing unit of the American Magic America’s Cup team, the winning Quantum Racing crew line up for 2018 sees the return of Matt Cassidy (USA) in the mid bow role, Maciel Cichetti (ARG) join as trimmer, Cooper Dressler (USA) as grinder and Barker on the helm.

The core crew – with Barker and Hutchinson – tuned up their boat on boat skills and comms when they contested the Ficker Cup and the Congressional Cup in the USA in late April, laying down their key foundation skills together. That has mostly paid handsomely as Quantum Racing have consistently been the best starters, with the exception of the coastal race where they were judged to be over the start.

Victory in the last race for Harm Müller-Spreer’s Platoon was enough to return them to runners up overall at the expense of Takashi Okura’s Sled. With the chance to secure second, which would have been their best ever regatta finish since joining the circuit in Ibiza at the end of the 2014 season, Sled fouled Paprec in the final seconds of the start sequence and had to immediately take a penalty.

They started off the line in 11th and could only recover to tenth and so Sled slid to third overall. It is the third time they have finished on the third step of a regatta podium after thirds in Miami in 2014, Valencia in 2015 and at the end of the 2016 season in Cascais.

“It’s a bit disappointing because the team’s been going really well, the boat’s going really well, and we had a chance for holding onto second there. But all in all we’re stoked with how it’s going. Finishing third we could have banked that at the beginning of the regatta we would have done so for sure, so we’re pretty happy. We’ve got plenty of things to work on and it feels like we are actually getting better every day, which is really really important. It’s very exciting, everyone’s really motivated, it’s a great group of people and Mr. Okura is really a fantastic helmsman so that makes it fun.”

“You can’t play it safe otherwise you’ll be in the back, you’ve gotta kind of go for it.. We have little things that we can improve upon: with our boat speed and tighten up tactically and boathandling, just a lot of little things but I’m sure we’ll be a better team at the next regatta in Zadar. It’s probably going to be light air again there and it’ll be tricky, so it’s going to come down to good starts and good first beats.”

Quantum Racing’s winning scoreline included three first places, one third, two fourth places, a seventh and that eighth in the coastal race, heading to the second event of the season in nearby Zadar – in just 23 days time – with a 2018 52 SUPER SERIES circuit lead of five points on Platoon and 12 points on Sled.

The strength in depth of the 2018 fleet is nothing short of remarkable. With nine new boats in the fleet it was instructive to see Hasso Plattner’s Phoenix take second in the final race, and Luna Rossa scored their best finish yet – crossing third in the final race. If the last race was a heartbreaker for the Sled team so too there was a tinge of disappointment for Eduardo de Souza Ramos’ crew of Onda. With Robert Scheidt calling tactics they crossed the finish in fifth, but as 2017’s circuit champions Azzurra beat Quantum Racing right on the finish line, that was just enough to give Azzurra fourth overall at the regatta on double countback. In fact both teams scored one second and one third apiece and it was down to Azzurra’s two fourth places that earned them fourth overall.

The first visit ever to Croatia for the TP52 class has proven immensely popular. The gentle sea breezes have been challenging but have kept the very evenly-matched fleet extremely close and compact. There have been no easy gains, pin sharp starting has been key to success. Five different TP52 teams have won races, Platoon (2), Quantum Racing (3), Sled, Paprec, and Provezza. 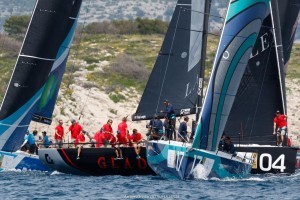 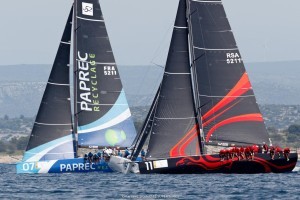 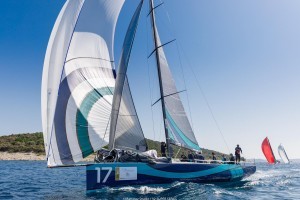 Volvo Ocean Race: Setting up for an epic finish in Cardiff