Puerto Portals is the fourth regatta of five, Quantum Racing lead the season standings by 19pts. Two teams have won 2018 regattas so far, will Puerto Portals see a different victor?

America’s Cup winner and Olympic champion, Peter Burling (NZL), tactician, is on board returning Gladiator. The fourth regatta of the five 2018 52 SUPER SERIES event series starts on Tuesday from Puerto Portals, Mallorca and time is running away for the top teams that have yet to deliver a keynote performance this season.

Standout performers so far this season have been Doug DeVos’ Quantum Racing, which, after winning two events, top the 2018 series leaderboard by 19pts, with Takashi Okura’s super consistent Sled in second place.

But so high is the level – and perhaps because the process of assimilating the small details that make the nine brand-new boats tick is still ongoing – this has so far been something of a rollercoaster season so far.

Two teams have won regattas, Quantum Racing triumphed in Šibenik and Cascais with Dean Barker driving, and Luna Rossa won in Zadar. But with nine teams building new boats this season and the fleet operating at such a universally high level, a regatta win is still a definitive reward that can mark any season as a successful one.

The defending 2017 52 SUPER SERIES champions Azzurra won the PalmaVela warm up regatta but were fourth, then seventh, in Croatia before taking a close second to Quantum Racing in Cascais, Portugal last month and are in good shape as they head to the Bay of Palma venue where they have been the most successful over their long history. In the eight times the 52 SUPER SERIES has raced on the Bay of Palma – either from Portals or at the Copa del Rey – Azzurra are the only team to have always finished on the podium.

But Harm Müller-Spreer’s 2017 World Championship winning Platoon, and Ergin Imre’s Provezza – memorable victors at this regatta in Puerto Portals last year – have yet to achieve their usual high level of consistency. Platoon have been second, fourth, and most recently sixth, and would like to halt a downward slide at a venue where they have blown hot and cold, while Provezza are looking for their first podium finish of the season.

“Nothing went well in Cascais. We had really bad starts. We struggled to find the right modes on the first few days. When we did get into good positions on the first beats we could not hold it and get in to the top mark, we had the spinnaker swimming. And that pain is all self-inflicted. We cannot blame anyone else but ourselves,” grimaces Platoon’s Dirk De Ridder, the America’s Cup and Volvo Ocean Race winning mainsail trimmer. “The first two regattas were better with the second and fourth. The fourth could have been a second had we not started early in the last race. I think we are confident with the boat in these [Bay of Palma] conditions. But winning the circuit looks difficult, but we are right in the fight for second.”

Provezza’s navigator, local Palma Bay wizard Nacho Postigo confirms that the renowned Bay of Palma not only rewards the best starters, but more often than not punishes those who don’t get off the line and into their preferred lane.

“Normally it is so one-sided here that it is extremely important to get a good start. With a bad start, there is usually no coming back. So, for example if you are in the bottom half of the fleet at the top mark it is very difficult to get back,” Postigo highlights.

“But that does depend where the race committee sets the course and from what we have seen they intend to set it more towards the middle or right of the Bay and that can be right between the two breezes and so it can vary much more. And at the Copa del Rey this year [two weeks ago] it was actually very different, sometimes it was swinging to the right and sometimes to the left, and even on consecutive legs, so it was very open. We might see that again,” he adds.

As for the chances of Provezza defending the Puerto Portals title? Postigo smiles:

“We need to get our sh** together! We have not yet really back to the best shape we were in this time last year. Some of the new boats are showing their strength, but others are really up and down, it’s a rollercoaster. Quantum Racing and Sled are doing great, but everyone else is still learning their boats.”

Significant changes for this regatta include the return of owner Doug DeVos to steer Quantum Racing, Dean Barker stepping to the role of strategist. At a venue that requires pin-sharp starting, the ebullient owner-driver DeVos should realistically hope to improve on his race average of 5.5pts – achieved through the one event he steered in Zadar, Croatia – aspiring to get closer to Dean Barker’s average of 3.05pts. Tony Langley’s Gladiator returns to the fold after missing the Rolex TP52 World Championship in Cascais due to racing commitments in the USA, but will have Emirates Team New Zealand’s America’s Cup winner and Olympic gold medallist Pete Burling sailing as tactician alongside owner-driver Langley.

State-of-the-art boat tracking technology will allow 52 SUPER SERIES fans to follow their favourite teams at the Puerto Portals 52 SUPER SERIES Sailing Week. Streaming is available via the 52 SUPER SERIES App, and is paired with expert commentary both on and off the water. All shows start 15-minutes before racing is due to start. 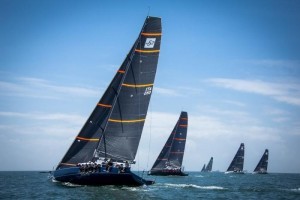