Emirates Team New Zealand are back to defend their title in the hotly-contested Beneteau 40.7 fleet at the 12th edition of the China Cup International Regatta, which takes place next week from 8 to 12 November. In total, 112 boats are set to compete across a range of keelboat divisions: IRC, HKPN, ASAF, Bavaria 37 and Beneteau 40.7.

It took a few years of trying, but last year the winners of the 35th America’s Cup broke through with victory on Daya Bay near the city of Shenzhen. Laurie Jury’s crew - a mix of old experience and young talent - are back again aboard Yiihua Pocket Emirates Team New Zealand, although the international competition looks as hot as ever.

A year ago the Kiwis had to match race Joseph Dennis O’Keeffe’s Vanhang Longcheer on the final day to secure the title, and the Chinese entry with a strong Australian contingent will be out for revenge. Another New Zealander, Jono Rankine, always puts together a strong challenge with his crew from Cheung Kong Sailing Club Team. There are some big names from the offshore racing world, not least Wendy Tuck, the Australian skipper that won the Clipper Round the World Race earlier this year, who skippers Team The Way.
Maksim Taranov won the Nord Stream Race, the 1,000-mile offshore race through the Baltic Sea during the summer, and he takes the helm of Parma Sailing Team, one of two Russian entries in this division. With other entries from countries as diverse as Canada, Tunisia, South Africa and the Philippines, this is a very international line-up in a fleet that will see 24 Beneteaus jostling for position on the start line.

With many repeat customers returning year after year, the China Cup has certainly hit upon a winning formula. The China Cup starts on Wednesday evening with a skippers briefing followed by a spectacular poolside party at the rooftop bar of the Royal Hong Kong Yacht Club. The following morning the fleet sets out from Hong Kong to Chinese waters in the New Sports Passage Race, an opportunity for the larger boats like Frank Pong’s 75ft Maxi sled, Jelik, to stretch her legs on the race to Daya Bay. This year, an additional day of inshore racing has been put into the schedule, so the various fleets will race for four days in Daya Bay, competing in a mix of configurations including a round-the-island race.
In the evenings, a gathering of more than 1500 competitors can look forward to some lavish parties, with drinks and beautifully prepared food in plentiful supply. During the day, however, the racing will be fierce. Having won many times in IRC Division B, last year Shawn Kang switched up to IRC A with his Ker 46, Lighthorse Alpha+. He missed out by a single point to eventual IRC A winners, Standard Insurance Centennial Sailing Team, Ernesto Echauz’s beautifully sailed TP52 from the Philippines. Doubtless these two will be somewhere in the battle for overall victory again. Shenzhen Seawolf proved dominant last year in IRC Division C, winning all six races. Will Yan Yuye’s Ker 42 have it all her own way again?

Aside from the serious competition on the water, the China Cup prides itself on attracting new people to the sport, particularly younger sailors. The China Cup Youth One Design Class is an international competition that attracts over 100 young sailors from New Zealand, Hong Kong, Xiamen, Shenzhen and many other regions around China. The SEED Public Welfare Sailing Project, established in 2016, has attracted over 100 families into sailing. Also, China Cup has selected young sailors from all over the country to join the international top sailing team for training and racing in the event.

The China Cup International Regatta 2018 takes place over five days from 8 to 12 November in the waters of Shenzhen and Hong Kong. As of 2 November, there are around 1,500 sailors representing almost 40 different regions and nations including: New Zealand, Australia, USA, Great Britain, Russia, France, Spain, Italy, Portugal, Germany, Switzerland, Sweden, Norway, Finland, Denmark, Netherlands, Ireland, Canada, Estonia, Austria, Tunisia, Oman, South Africa, Japan, Korea, Malaysia, Singapore, Philippines, Thailand, Chinese Taipei, Hong Kong, Macau and China. China Cup International Regatta, approved by General Administration of Sport of China, is co-hosted by the Water Sports Administration Center of the General Administration of Sport of China and Chinese Yachting Association as well as Shenzhen Municipal Administration of Culture, Sports and Tourism. It is the largest China-initiated international sailing regatta, and the biggest First 40.7 regatta in the Asian-Pacific region. China Cup International Regatta has been awarded 'Asian Regatta of the year' on four occasions at the Asian Marine and Boating Awards, and by brand value is recognised as one of the top 10 sporting events in China. 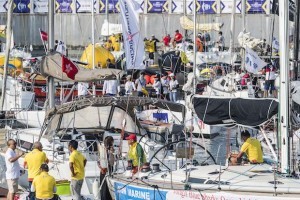 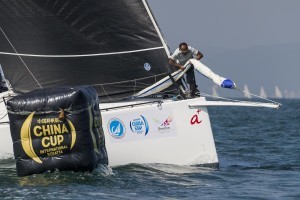