Congressional Cup gives sailors & spectators a taste of the wild

Congressional Cup gives sailors & spectators a taste of the wild

More round-ups than a Western movie thrilled spectators, and challenged competitors, on Day Two of the Long Beach Yacht Club Congressional Cup regatta. Dean Barker (USA) and Team American Magic continued to hold the reins at the top of the leaderboard, as racing continued into the second Round Robin.

As the breeze rocketed up to 18 knots, there were wipe-outs, collisions and protests galore. Johnie Berntsson’s (SWE) Catalina 37 was so damaged during contact, it began to take on water; they transferred to the backup boat. And Harry Price (AUS) proved how close race action is to the audience on the Belmont Veterans Memorial Pier; when his boat knocked a lamppost off the corner of the wharf. It will now be known as ‘Price Point,’ sailors jested.

Despite chaos and crashes, Chief Umpire Russell Green announced, “Today is one of the best days match racing has seen. Congratulations to all the competitors.” Green has been a World Sailing International Umpire since 1991, involved in the Olympics, America’s Cup and the foremost racing events around the globe. His accolade is a testament to the high level of competition and professionalism exhibited at the Congressional Cup regatta. Racing continues through Sunday, April 22, in the waters off Belmont Veterans Memorial Pier, starting around 11:30AM daily.

This afternoon’s thrilling conditions unfolded after a rainy, stormy morning. Strong breeze and significant chop mixed with bloodthirsty sailors – hungry for a spot in the semi-finals – to create a thrilling atmosphere. With seven races remaining in the Round Robins, Barker remains on top at 10-1; suffering his first defeat of the series, to Eric Monnin (SUI). Sam Gilmour (AUS) is in second, 7-4; followed closely by a trio at 6-5: Johnie Berntsson (SWE), Taylor Canfield (USA), and Ian Williams (GBR).

A collision during the Berntsson vs. Barker match, with both boats heeled way over in the breeze; caused Berntsson’s boat to get holed below the waterline. The slow seepage forced the team to swap to a backup boat. The Long Beach Sailing Foundation maintains a fleet of 11 equally equipped custom-made Catalina 37s specifically for one-design and match racing. The 37-foot keelboats are maintained to identical standards in all performance areas: weight, equipment, rig tuning and sails; to put the onus on the skills and strategies of the competitors.
“We though the Catalina 37s were unsinkable,” Berntsson said, passing a case of Stella Artois to the repair boat crew, and thanking them for their assistance.
Despite contentious racing, most of the sailors are fairly chummy, frequently traveling to the same events around the world.
“We’re really good friends actually,” said Canfield, after his rousing bout with Chris Steele (NZE); playing golf and socializing in between M32 racing events in Miami.
That friendship brings with it a good deal of familiarity, though.

“It’s always a challenge trying to figure out where to jibe; if you go to early the trailing boat can take advantage of that.” But with Steele on his tail, he said, “We picked a good spot to jibe, and made his decision very hard. In that situation, you’re almost hoping he tries to roll you, because then he’s stuck out to the right side of the finish line; and that’s just what played out. He got a bit too close, which gave him a penalty.”

“It’s quite funny, because you know what he’s thinking, and vice versa,” added Steele. “It goes back and forth. You gain a little advantage, then give a little way to the other guy. The result can go from what looks like a really comfortable win, to slipping away from you.” Steele lost that match, and sits at 4-7. “We lost three that could have gone our way; which is very frustrating. But it’s exciting racing; it’s all really good fun and all the guys are in really good spirits.”
Double Round Robins continue tomorrow, advancing to semi-finals, petit final, and final racing through Sunday April 22, when the winner hoists the silver Congressional Cup and dons the prestigious Crimson Blazer. 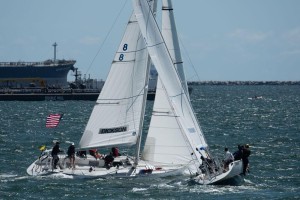 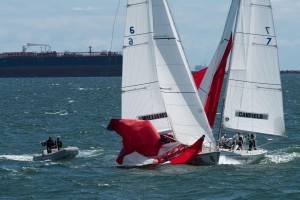 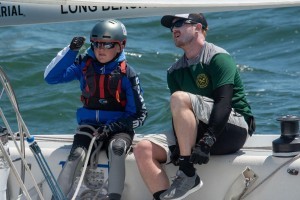 The Resource Consent has been lodged with the Auckland Council