Reflecting a growing interest and passion for the class in Spain, 14 6-Metres raced today for the first time as a fleet on the Bay of Palma at the 37 Copa del Rey MAPFRE. The fleet is split into two divisions – Classic and Modern with seven yachts racing in each division. Hugo Steinbeck and his crew on “Sophie II” won both races in the Modern fleet and José Cusí and Pedro Campos, with Ross Macdonald as tactician, also won the Classic fleet twice on “Bribon”.

The Embat sea breeze picked up slightly more than on Monday’s relatively gentle opening day, reaching a welcome 14kts at times to help assuage the stifling summer heat. The arrival of the 6 Metres brought the total number of boats on the bejewelled Balearic bay to more than 140, racing on five different course areas. The GC32 flying catamarans and the Melges 40s start their race programmes on Wednesday.

Two more windward-leeward races were contested and with four races now contested for most classes all four teams which opened Monday with a pair of victories could not maintain that perfect winning momentum. In the Sotheby’s Mallorca IRC Class Zero, Dario Ferrari’s Botin designed Maxi72 “Cannonball” won the first race before jumping the gun on the second race and having to restart. And in IRC Class 1 Vicente Garcia Torres’ Swan 80 won the first race and Tina Plattner’s TP52 “The Phoenix” triumphed in the second contest, both breaking up the winning record of class leaders, Karl Kwok’s “Beau Geste”. And in the ClubSwan 50 fleet which saw “NiRaMo” victors twice on Monday, today’s race wins went to Hendrik Brandis’ “Earlybird” and to “Cuordileone” which has Claudia Rossi steering and Paul Goodison calling tactics.

“Cannonball’s” tactician Vasco Vascotto, with 1,2 the joint best scoring boat today in Mallorca Sotheby’s IRC 0, and French skipper Stéphane Neve on the best IRC 1 boat of the day, the TP52 “Paprec Recyclage” both shared the identical sentiments. They were happy to have improved on their Monday showings, but both could have done much better. In the case of “Cannonball” they did not follow up on their Race 3 win because they were over the start line early, while Neve rues the fact that the “Paprec” crew were not fully back into race mode before the start of their Race 4 and so started poorly. After finishing second in the first race, he was upset they could not follow up in the breezier second windward-leeward. But with 2,5 theirs was the best aggregate of the day.

“Cannonball” won the start in the IRC 0 class Race 3 and, after a spirited tacking duel with “Momo”, went on to win. “Momo” profited in the second race to win and so leads IRC 0 class by two points ahead of “Cannonball”.

Vasco Vascotto, the “Cannonball” tactician explained, “ I think we were more into the game today. Yesterday we were a little soft. On the second race we were over the start line, according to our RIB it could not have been any more than 20cms over – but we are sailing better today. The boat is better than last year. We have changed the shrouds and the runners and the sail programme is better. Upwind we are a different boat, for sure faster. Momo is a very competitive boat but if we sail like we did today we have a chance to win. This is about working up to be the best at the worlds in Sardinia. We want to be as ready as possible and at the moment Momo have a little edge and so we have to get better in this last period.”

Stéphane Neve the skipper of “Paprec Recyclage” recalled; “It was better than yesterday. We were third at the top mark and the boat is quick downwind, we know that. It is better downwind than upwind. And in the second race we were rushed before the start and that was not good. Some of the guys were late eating pasta and were too late. That was not good and I was upset about that. We should have done better.
But we were quicker today in slightly more breeze. The big Swan (“Plis Play”) won the first race but we don’t want to play with them. When you get too close the wind shuts off!”
“ Finally we had a good day but it is frustrating that it could have been better, we let a few points go.”

Enjoying his first ever Copa del Rey MAPFRE, Goodison commented:
“We have been using the wrong spinnaker and letting boats slip by us downwind but in the second race today we used the 100% kite and we passed boats downwind and won the race. That was a bit of a relief because it proves we do know what we are doing! I was getting a bit frustrated to be honest. This is only the second day for me on the boat, ever, and so it is all new. They are nice boats but a bit slower than I am used to. But it is great fun but takes some readjustment! The guy I sail with on the Melges 32 is the trimmer on here and he asked me at the start of the year. So I thought it would be a nice change. There is a bit too much sunshine, it is pretty hot. I have never done this regatta. It was funny because when I arrived the other day ours was the only boat on the dock and when I came back I suddenly realise how big the regatta is. It is a great atmosphere. I am doing a little bit of sailing now with Mascalzone Melges 32 and the J/70 and then in September I move to the USA (he is on the crew of American Magic) which is exciting and I am looking forwards to getting back on the foils.

And in BMW ORC 1 there was disappointment for the crew of “Estrella Damm”, Nacho Montes and Oscar Chaves’ Dk46. They were the only team to have won three races off the bat, but then pulled out a jib track on the first beat of Race 4 and finished fifth, so ceding the overall lead to the omnipresent Swan 45 “Rats on Fire”, but by only one point.

Luis Martínez Doreste, skipper of "Estrella Damm" in BMW ORC 1 sung, “We are sailing quite well and the boat is doing great. The key can be that we've done more training than last year, and we have two new sails that go very well in this wind range: a light genoa and an asymmetric A1.5. In general, the wind range we are having here fits us very well".

The GC32s start racing Wednesday. Leigh McMillan has been sailing with “INEOS Team UK” this year and says they are well trained, ready to compete:
“ We have had four days. Getting on to the race track and getting your race craft up and running is the priority here so it is great fun to be sailing with these guys and I am looking forward to the challenge we have this week. We have some very competitive teams who will be looking to win as we are.”

Tomorrow, W/L for all classes except for the Mallorca Sotheby's IRC fleets and, BMW ORC 2 and 3 which race their Coastal. 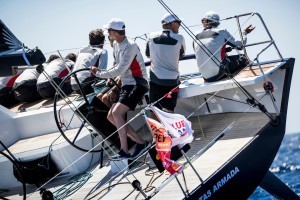 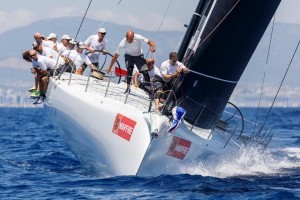 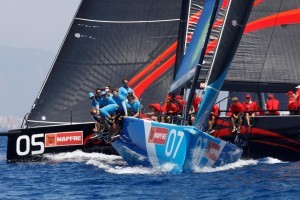 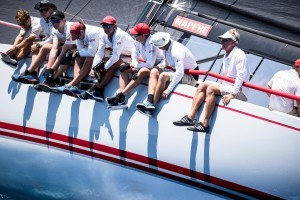 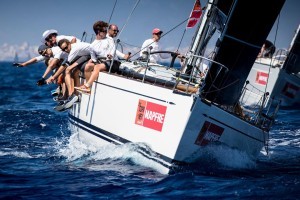 Palma begins the countdown to the 40 Copa del Rey MAPFRE

H.M. King Felipe VI of Spain presents the trophies to the winners