Extreme Sailing Series™ veterans and victors given a run for their money on day 2 of Act 1, Muscat

Veterans and victors given a run for their money on day 2 of Act 1, Muscat

Series veterans and victors were given a run for their money today, Thursday 15th March, in day two of the 2018 Extreme Sailing Series™ Act 1, Muscat.

The young pros on board Land Rover BAR Academy, as well as the newly formed crews NZ Extreme Sailing Team and Red Bull Sailing Team, chased their experienced counterparts around the racecourse with tenacity.

An array of strong results from some of the new kids on the block peppered the leaderboard by the end of racing. Land Rover BAR Academy took their first race win of the season, finishing third in the two races that followed. Skipper Will Alloway was pleased with his team's results.

"The guys did a great job of powering the boat up and getting us moving, and our results improved throughout the day. We're pretty happy overall but we won't stop building on this. We want to go into the final day in a strong position."

The Kiwi challenger NZ Extreme Sailing Team also proved tough competition on the glistening Omani waters. Starting and finishing on a high, the team took second place in the first and last races of the day, demonstrating their skill, determination and potential. Australian Skipper Jason Waterhouse was particularly happy with their flying start.

"That result for us was great. We're coming fresh out the oven here - we haven't sailed together before and I haven't sailed on this circuit for three years. The boys are doing brilliantly."

Austrian contingent Red Bull Sailing Team charged off the start line today, hungry for a race win in the competition's early stages. They weren't disappointed - the newly formed crew, led by double Olympic gold medallists Roman Hagara and Hans Peter Steinacher, flew through the fleet in the first race of the day, crossing the line in pole position.

"When the breeze is up we're feeling quite dangerous in the fleet, we're moving quickly," said helm Chris Draper with an air of confidence. "That was 100% better today and a huge step up for the guys. The input from Roman and Hans Peter is fantastic. We're in a great place."

Skipper Roman Hagara agreed. "We have some really good sailors and that's what they're showing here. They've won a race already after the second day on the boat - it just shows the team is really good and that they have the potential to win the overall Series."

For Act leaders Alinghi, it wasn't all plain sailing. An OCS [over the starting line early] in today's first race put them on the back foot from the beginning. Playing catch up, the experienced team leaned on their significant knowledge of the Series to climb the rankings - constantly looking over their shoulders for their chasing competitors.

"The team did a really good job today, but we didn't start the day that well," co-skipper and helm Arnaud Psarofaghis explained. "That put us in a bad situation but the team clawed back some critical points. I think it's going to be a tough event and an even tougher year - the new guys are especially strong and you have to fight for each point."

Racing on the powerful foiling GC32 catamarans continues tomorrow, Friday 16th March at 14:00 local time (UTC+4). Continuing off Al Mouj, Muscat, the event will host a free public access Race Village at Al Mouj Golf on Friday and Saturday, offering a close-up view of the race course. Racing will be broadcast live on the official Extreme Sailing Series Facebook and website. Tune in to follow the action.

The Flying Phantom Series saw Team France Jeune emerge victorious once again. Having flown around the course to a first day victory yesterday, the team stole the show for the second time today, consistently demonstrating their incredible abilities on the water.

Red Bull Sailing Team finished second in today's racing on the Flying Phantom course. Helm Olivia Mackay commented on their performance. "We started the day off pretty well yesterday so we just tried to go into today with the same head space. We're feeling good going into the last couple of days. We want to win the regatta - that's our goal." 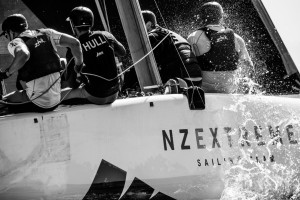 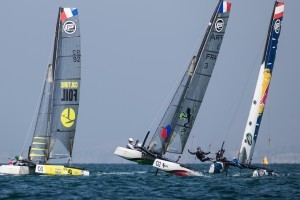 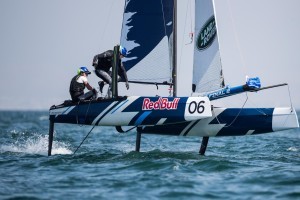 Southern Spars and the next generation of TP52 masts