- Significant damage sustained on both boats, causing them to retire from today's racing. All crew are safe with no injuries

- Alinghi continue their lead into the final day of Act 1, Muscat

Drama struck on the water today, Friday 16th March, as two of the season's newly-formed crews collided on the racecourse on the third day of the 2018 Extreme Sailing Series™.

NZ Extreme Sailing Team and Red Bull Sailing Team collided at the leeward mark on the fourth race of the day while locked in an epic struggle in the closing stages of the race.

Although no crew members were injured, significant damage was sustained to the rudders on both boats, forcing the challengers to retire from today's racing. Chris Draper, helm for Red Bull Sailing Team was disappointed to be out of day three.

"It's very frustrating from our point of view. We've got a big night of work ahead of us to get back on the water tomorrow and it's frustrating to give those points away that could cost us later on in the season. We'll get back out there and push as hard as we can tomorrow."

"Not the best way to start the season," added skipper Roman Hagara. "Luckily no one was injured."

Following a hearing with the umpires, Red Bull Sailing Team was disqualified from race 14 having not afforded NZ Extreme Sailing Team ample room to sail their proper course around the mark.

"When you think of the Extreme Sailing Series, you think of action and lots of breeze," he said. "That's why you come to Oman - for these beautiful sea breezes, the backdrop and this close racing. We got a little bit too close today, but that's what makes it so exciting and great to watch."

NZ Extreme Sailing Team was awarded average points in races 14 to 18, equal to that of average points achieved in races six to 13. Both boats will be back in the game tomorrow for the final day of Act 1.

With big breeze and glorious sunshine, day three in Muscat did not disappoint. In perfect conditions for extreme sailing, the teams flew round the course in strong winds, with the foiling GC32s hitting top speeds of 30 knots, just metres away from the crowded shoreline. Danish-flagged SAP Extreme Sailing Team had a spectacular day on the water, dominating the fleet throughout, taking four race wins. The team's helm, Kiwi sailor Adam Minoprio, was thrilled with his results.

"Today was great – downwind and lots of drama," he said. "I think we did very well. We had really good manoeuvres; we generally pride ourselves on our manoeuvres in big breeze. We're hoping the wind continues - it would make the last day really exciting."

SAP Extreme Sailing Team weren't the only ones to deliver strong results on the Omani waters. Team México, skippered by Erik Brockmann, achieved their best result of the competition, speeding to the finish of race 16 ahead of British contingent Land Rover BAR Academy.

"We're constantly trying to improve," explained Brockmann. "There were some races where we were really in touch with the fleet, and that's what we want - to be really competitive. It was perfect out there today; we're glad to have these conditions in Oman – we had a blast."

Yet more big breeze is forecast moving into the final day of Act 1. Will it all be champagne sailing, or will drama strike once again? Racing continues tomorrow at an earlier time of 13:00 local time (UTC+4). Tune into the live coverage on the official Extreme Sailing Series website and Facebook to catch the action.

The Flying Phantom Series continues tomorrow from 10:00 local time (UTC+4). Results are tweeted from the Extreme Sailing Series Twitter at the end of each race. 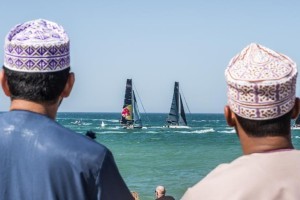 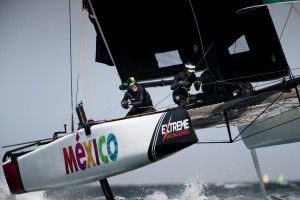 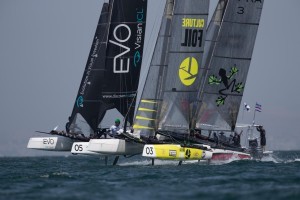 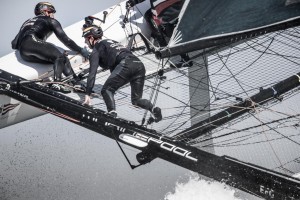 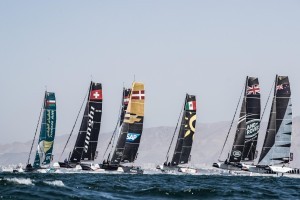 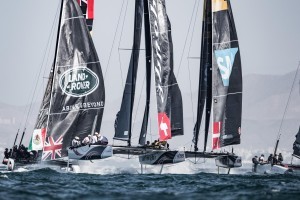