Taking an impressive five podium finishes in the day's eight races, the Brits meant business on the first day of the Extreme Sailing Series™ Act 4, Cascais.

Big breeze of up to 16 knots paired with flat water offered up perfect foiling conditions, as INEOS Rebels UK shot around the racecourse at speed, closing the day on the podium in third.

Having taken some time to reflect on their performance in Act 3, Barcelona, the British squad made a few changes to their set up ahead of Cascais, and they certainly saw results.

"We made some good choices today," said a pleased Will Alloway, the team's skipper. "The breeze built throughout the afternoon, so crew fitness was really key to keeping these boats moving fast. Our boat handling was good and we made some decent gains."

It was no surprise, though, that it was the Swiss who took the top spot in the Cascais opener, having demonstrated masterful sailing throughout the Series so far. Arnaud Psarofaghis and his crew sailed Alinghi to victory as they foiled into first place in four races, with podium finishes in all but one of the others.

"It was a very good day," said Yves Detrey, bowman for the team. "I think it's going to be important to be focused for the next few days. We need to make sure we don't overdo it, and if we ever fall behind, we know we can always come back"

Alinghi hit the top speed of the day, flying downwind at 30.2kts, an insight provided by SAP.

Team Oman Air finished ahead of INEOS Rebels UK, putting in a repeat performance in Cascais, following their second place finish in June's Barcelona Act. The team's skipper, Phil Robertson, described the conditions on the water.

"Shifty, puffy, flat water, glamour," he said with a grin. "It was pretty cool really, great conditions for this type of racing."

With challenging, shifty breeze that saw big gusts propel the boats around the bay, it was a baptism of fire for Team Portugal. The grassroots team of predominantly youth sailors from Lisbon and the Algarve had never before sailed their GC32 competitively. Mentored by Portuguese professional sailor, Luís Brito, and bolstered by experienced Series regular, Adam Piggott, the team tackled the tricky course with determination, finishing the day with 51 points.

"It was a hard day," admitted Brito. "The team is young and new to the circuit. We have a lot of work and a lot of learning to do out there."

It wasn't such a good day at the office for SAP Extreme Sailing Team. Despite entering Act 4, Cascais, tied on points with Alinghi, the Danish squad disappointingly found themselves towards the back of the fleet on two separate occasions, costing them dearly in the overall Act rankings. They finished the day in fourth place.

The Flying Phantom Series also took place today in Cascais, prior to the GC32 racing. Chased closely by Team France Jeune, it was Idreva Zephyr Foiling who took the top spot.

"It was a very good day with sun and wind," said a happy Charles Hainneville, helm for the team. "It was perfect for us and we took five wins out of six. It's only the first day though, so we'll have to see what happens."

The Flying Phantoms will continue racing in front of Clube Naval de Cascais from 10:00 UTC+1 tomorrow. GC32 racing is scheduled to commence at 14:00 UTC+1. All the action can be followed on the Extreme Sailing Series LIVE blog. 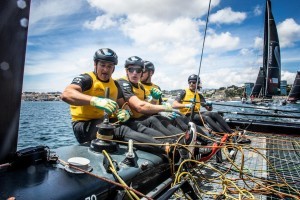 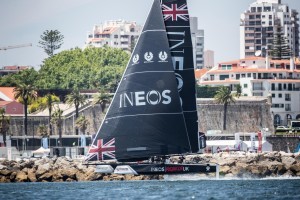 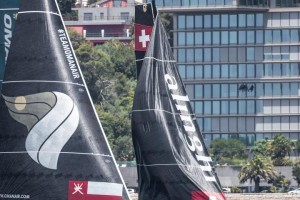 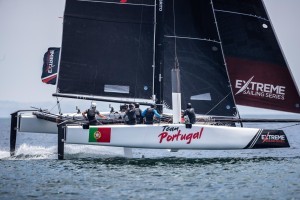 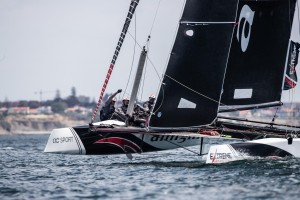