Despite the heavy rain and grey skies, SAP Extreme Sailing Team shone on the water yesterday at the Extreme Sailing Series™ Cardiff, winning five of the day's eight races.

Initial postponement due to rain squalls evolved into high octane racing on Welsh waters, as the seven international teams went full throttle around the racecourse, determined to take the top spot in the only UK Act of the 2018 Series.

Visibility may not have been the best, but this was no problem for the Danes who always had the first place finish firmly within their sights.

"It's great to be leading the fleet," said skipper Rasmus Køstner with a smile. "It was a challenging day with a lot of breeze. We really needed to keep it tight around the racecourse, but we had good starts so well done to the team. It's a short course here but it makes the sailing very entertaining to watch."

Despite their consistent podium finishes, the Danish squad requested a number of damage delays throughout the Cardiff opener.

"We had a few breakdowns with winches and locks which hold the sail at the top of the rig," explained their helm Adam Minoprio. "We managed to survive though, so it was a really good day for us overall."

It was no surprise that INEOS Rebels UK also performed well in today's conditions, the team evidently accustomed to the typical UK weather. Putting in a repeat performance of their podium success in Cascais, Portugal, the Brits bagged two bullets with a total of six podium finishes clocked over the course of the day.

"Today saw some solid boat work from the team," said the team's pleased skipper, Will Alloway. "There were a couple of small errors which we can definitely sort out tomorrow but I've got great confidence in the crew heading into the end of the season."

Having suffered a number of challenging setbacks so far this year, Red Bull Sailing Team hit the racecourse with all guns blazing, ending the day with a place on the podium in third.

However, the Austrians fine form appeared to tail off in the final two races, in which the team fell towards the back of the fleet.

"We knew Cardiff would be tricky," admitted the team's double Olympic gold medallist skipper, Roman Hagara. "You can gain a lot when you assess all the options you have, and that's what the team did during racing. We had a few bad races but we're looking forward to tomorrow."

Being fast learners and always improving, the tenacious crew on Team México were also seen breaking into the top positions today. Taking two consecutive third place finishes in races five and six, the Mexicans gave the Cardiff crowds a glimpse of the sheer talent they're sure to showcase on home waters in Los Cabos at the end of the 2018 season.

"We had two thirds back to back, which was great for us," enthused the team's skipper, Erik Brockmann. "The start of the day was pretty hard as we finished last in two races, but that's the good thing about having eight races a day - we were able to fight back and the team did amazingly."

Despite their string of Act wins, the Series frontrunners - Swiss team Alinghi - today suffered an array of setbacks on the water.

"We had some issues because Nils Frei, our headsail trimmer, had a minor injury in the first race," explained co-skipper and helm, Arnaud Psarofaghis. "We tried to compete in the second race but he couldn't continue. Gillies Monroe, the reserve sailor from INEOS Rebels was able to come on board, so thanks to the team."

The Flying Phantom fleet took to the water this morning for the first day of their Series finale. Big breeze saw the boats fly around the course, but it was far from plain sailing for some of the top dogs. Both Team France Jeune and Culture Foil suffered mishaps on the water, both resulting in capsizes.

"During the third race of the day, we capsized during a gybe and snapped the mast," explained Team France Jeune's crew, Antoine Rucard. "It was a bit dramatic but the boat is okay, it was just the mast that suffered some damage."

Both French teams will join the rest of the fleet on the start line tomorrow morning at 10:00 BST/UTC+1.

GC32 racing is scheduled to begin at 14:00 BST/UTC+1. Days three and four will be streamed LIVE on Facebook and YouTube. The free-to-enter Fan Zone is open from 11:00 tomorrow, with a range of activities available for all the family. 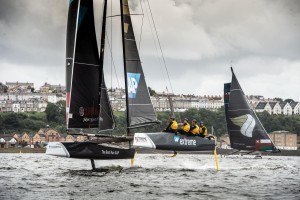 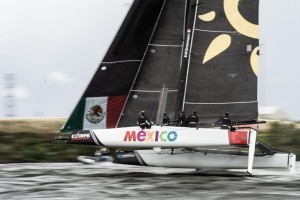 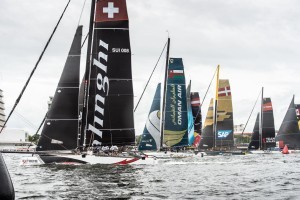 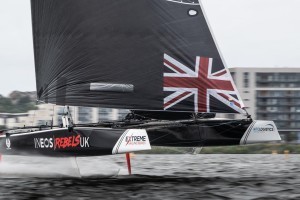 And then Charal was came to life, Inch by inch and with the greates care in the world