In a matter of days, the twelve-strong international fleet of Flying Phantoms will descend upon Qingdao, China, for the first time in history to participate in the first ever Qingdao Mazarin Cup powered by Extreme Sailing Series™.

Representing six nations: China, Hong Kong, France, New Zealand, Germany and Spain, the super fast foiling fleet will fly around Fushan Bay at speeds of up to 31 knots, competing on short courses with up to eight races each day from 30th September to 3rd October.

Ready to race off the Qingdao start line are numerous sailing stars, many fresh from the recent five-Act Flying Phantom Series that concluded in Cardiff in August as part of the 2018 Extreme Sailing Series™. Having won the final Act of the Series, New Zealand’s Micah Wilkinson, crew for Hamilton Huas, and Tokyo 2020 Olympic hopeful, is looking to take the waters of Fushan Bay by storm.

“The regatta in Qingdao is going to be amazing,”he enthused. “I’ve never been to Qingdao but have watched the Olympics when they were hosted there 10 years ago and all the Extreme Sailing Series Acts. It’s definitely the kind of location that us sailors are keen to go to. I’m looking forward to racing on a course that’s seen some spectacular racing in the past.”

With twelve boats on the start line, dramatic battles are bound to ensue. 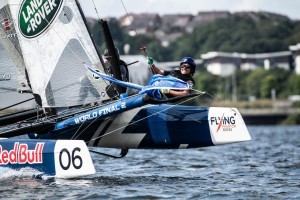 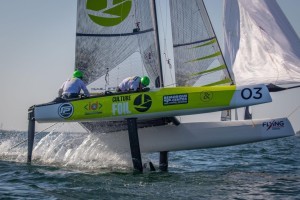 Greenest Team of the Year, Team Phoenix are Naturals at Sustainability