An elated Oman Air finished the day tied on points with the Austrians as they head into the penultimate day of the ten-month long Stadium Racing championship.

"It's really good to take the lead," skipper Phil Robertson chirped. "I think we kept it pretty consistent today. We've been in the top three in every race so far, so it's a good place to start in a tough fleet. It's going to be a big push over the next few days to get as much in as we can. We're at the front now but our position is not safe at all."

They may have lost their clear lead, but opposing Red Bull Sailing Team are calm, collected and ready to smash their way through day three on Saturday.

"We haven't been in this position for a long time so we are enjoying it," said mainsail trimmer and double Olympic gold medallist, Hans Peter Steinacher. "All the others are constantly looking at the overall results, but we can afford to relax. It's allowing us to sail our best out there."

There was some unexpected turbulence, however, for Swiss team Alinghi. The current overall Series frontrunners fell from their usual lofty heights as their score sheet became peppered with results outside the podium.

Craning their necks all day, Psarofaghis and his crew spent the racing looking over their shoulders at chasing rivals SAP Extreme Sailing Team, currently ranked second in the overall Series and just seven points behind Alinghi in the Act.

There's no scope for buckling under pressure – anything less than a third place finish in Mexico could cost the Swiss the Series title.

"We got a race win today but it's not enough," admitted Alinghi's co-skipper and helm, Arnaud Psarofaghis. "We're going to have to sail better on the two remaining days to make sure everything is fine. We're enjoying the finale, we'll have to see what the outcome will be."

For the Brits, it wasn't the best day. Despite the presence of INEOS Team UK senior crew: Ben Ainslie, Giles Scott and Joey Newton onboard, the squad was bumped out of fourth by the Danes, closing the day in fifth place in the Los Cabos Act, valid for double points.

"It's so shifty out there, so we're just trying to sail our own race," mainsail trimmer Mark Spearman said. "We're definitely looking forward to tomorrow. We've had solid speed, solid boat handling and solid starts for the last few days, so we've just been missing out a bit on the pressure and the correct shifts. Hopefully we can get it all together for tomorrow."

"In the two races with the best wind, we were actually doing okay," he explained. "We know we can get the boat going fast, so we will come back tomorrow with more determination – hopefully there will be a bit more wind too."

The penultimate day of racing in Los Cabos kicks off at 14:00 local time (UTC-7). It will be streamed live on Facebook, YouTube and on the Extreme Sailing Series App, powered by Spark Compass and VOGO Sport, which is available to download through the App Store and Google Play. 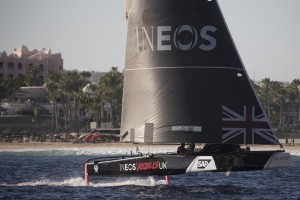 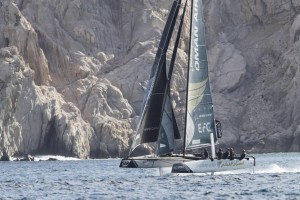 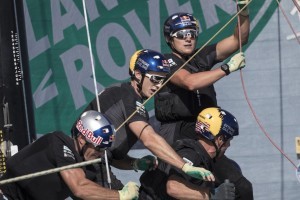 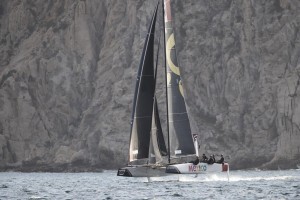 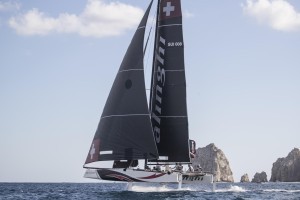