Despite fun and games on the water, a lack of wind prevented any racing on the last day of the HYS FAST40+ National Championship. Niklas Zennstrom’s Swedish Carkeek designed Rán VII was awarded the FAST40+ National Trophy after topping the table after five races sailed. Bas Voogd’s Dutch Carkeek MkIII Hitchhiker was runner up, and Filip Engelbert’s Swedish Ker40+ Elvis was third.

Rán's Steve Hayle's commented. “Niklas and all the professionals on board are really loving the FAST40+ Class. The racing is very well managed and Phil Hagen and his team did a great job in difficult conditions. The youngsters in our team have considerable improved their boat handling over the last three events. The light airs made the racing incredibly competitive, we know we have a quick boat but it was only in the last two races, when the breeze got up a touch that we could really use that edge. Team Rán has been really welcomed to the class and whilst the racing is competitive, and the boats are really great, there is a great atmosphere after racing.”

Round Four of the 2018 FAST40+ Race Circuit will take place as part of Lendy Cowes Week 4-7 August. 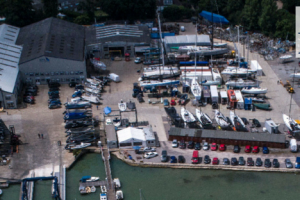