With four race wins and two second places, Niklas Zennstrom’s Rán took class victory, though it was much tighter on the water at times than the results suggest. Rán took two more race wins on the final day, Sunday, to take the weekend on six points.

This moved Khumbu up to second overall, six points back from Rán, while Peter Morton’s Jean Genie slipped one to third, one point behind.

After the opening day was lost with gales battering the south coast, Saturday brought a range of conditions with three different race winners. However the event ended with a brisk Sunday with winds rising from 10-12 knots to 24-26 knots in the final race, while the usual rainclouds brought a dampener to the air, if not the competition.

Steve Hayles on Round 1 winner Rán summed up everyone’s feelings. “None of us have done anything much with these boats for a year, so everyone was just happy to be out there, and to see everyone racing again.”

“We went out today with a pretty windy forecast and it was about not doing anything stupid, especially on the coastal races, with code zeros. There was a lot of ‘risk or reward’, so it was about staying out of trouble. We have had a long break.

“It turned out to be simple day on the water, but on the boat it was full on. We were very, very ropey on Saturday but fortunately put a good day together.”

Rán clearly struggled with the starts on Saturday and he admitted they had some communication issues. Sunday was better with two reasonable starts to twice lead the fleet round the course.

“Our focus was on starting and sailing cleanly. They are quick boats but difficult to handle, and easy to stall coming out of a tack. So today was about keeping it simple. The Solent is also a tough place to sail with the tide and the wind. Getting it all right is not always easy.

He says he enjoys sailing the Fast40+ more than some of the pro grand prix racing."It’s a nicer dynamic and the pro-am element is absolutely brilliant. We had three girls on this weekend and for the next event we’re are hoping to have four. Pushing youth and female participation is something Niklas wants to do. It’s a big thing for him.

“In the end this turned out to be a really good event for us, and the fleet. It wasn’t our best day on Saturday, but overall it was good for us. We are looking forward to getting more boats out for the next event. But the bottom line is that everyone is happy to be back.”

He said “We really enjoyed the final reach where we really lit up and were able to hold a higher lane than the others due to our rudder configuration. We came into Rán but lost a bit as we had to do a manual drop and the tide was bringing the others down to the mark quickly. The final beat was tight and we were able to cover Khumbu and Jean Genie to hold onto second place.

“We were very happy with our performances over the weekend, especially in the windier conditions. Thanks to the race team for organising another great regatta.”

Peter Morton’s Jean Genie struggled slightly in the windier conditions on Sunday, though was always within striking distance of the others.

The team was rejoined by Ben Cornish, fresh from the America’s Cup on INEOS Team UK.

He summed up the weekend for the team. “We came into this weekend with the class not racing for a really long period of time. The boat's performance was rather unknown until this weekend so it was great to be out there figuring it out and learning how we shape up. We probably should have been a few points better off after Saturday - a couple of breakdowns left us a bit compromised around the course but it was great racing within the fleet.

“It’s good to see a few different boats sharing the race wins. Rán sailed a solid day today so well done to them, but it’s great to be back onboard with Morty and the boys. We will sharpen up with each day afloat and I am really looking forward to some tight racing in the Fast40+ fleet in the near future. Thanks to Stuart [Childerley] and his team for getting the best out of a pretty grim weekend in terms of weather.”
Second placed Khumbu, also decided to have a simple day. Runner trimmer, Sam Carter explained, “We made the call to leave the code zero on the dock, with the intention to keep things clean and simple which seemed to work out well.

“We had a couple of tough starts, which meant we had to break out from the pack early in both races. We were super pleased with the team working well to get back into the mix. It was a great day out with some big breeze and tight racing.”

He says they are delighted with how everything has come together. “Credit is due to our boat captain, Tank. The crew, too, are coming together after a few pre-season training days. It feels like we have a foundation from which we will further develop, allowing us to, hopefully, get quicker.

“There was some super racing throughout the weekend - we had three different race winners yesterday and everyone noted the strong performance of Ino in the coastals. 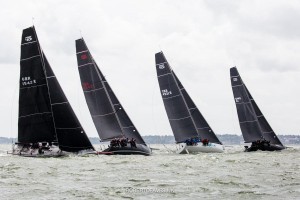 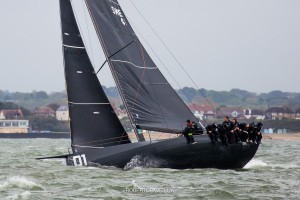 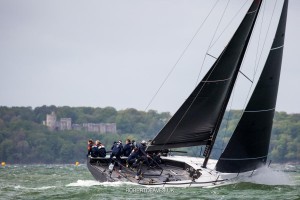 Launched last week, Evo V8 is the new flagship in the Evo Yachts