One week from today the fleets of the GC32 Racing Tour and the Extreme Sailing Series will be locking horns in the initial races of the first ever GC32 World Championship. Held over 23-27 May, this event takes place in one of the world’s best venues for foiling catamaran racing – Riva del Garda on Lake Garda, renowned for its strong winds and flat water, ideal for the flying boats to achieve maximum 30+ knot speeds.

The line-up for the GC32 World Championship is one of the most international in big boat sailing. Competing teams herald from European countries, such as France, Britain, Austria and Switzerland, and from further afield – the USA, Oman, Mexico, Australia and New Zealand.

Among the mix of fully professional and accomplished owner-driver campaigns are some of the best teams and best sailors in the world, all attracted by the opportunity to race state of the art, ultra-high speed flying race boats against other like-minded crews.

In highest demand are crew with past experience on the flying catamarans of the last two America’s Cups. For example sailing with Team Tilt is Glenn Ashby, who skippered Emirates Team New Zealand to victory in the last America’s Cup. Then there’s Chris Draper who steered the Luna Rossa AC72 in San Francisco and now helms Roman Hagara and Hans Peter Steinacher’s Red Bull Sailing Team. Numerous crew competing at the GC32 World Championship sailed with America’s Cup teams in Bermuda and San Francisco.

Top of the pile is certainly Ernesto Bertarelli whose Alinghi team won the America’s Cup in 2003 and brought it back to Europe (for the first time since 1851) where they successfully defended it in 2007. While this event was in monohulls, Bertarelli personally has more than 25 years’ worth of experience helming racing catamarans on Lake Geneva where he is a multiple winner of Switzerland’s top annual sailing event, the Bol d’Or Mirabaud.

Bertarelli will be helming his Alinghi GC32 in Riva next week surrounded by his regular team, including Arnaud Psarofaghis, one of the most talented foiling sailors of his generation.

"We are looking forward to the strong competition,” says Alinghi's coach Pierre-Yves Jorand, congratulating the GC32 International Class Association on getting the World Sailing recognition that has enabled it to hold its first official World Championship. “It will be great to see the two circuits sailing together. On both sides there is lots of experience – we know the Extreme Sailing Series teams very well and looking at the GC32 Racing Tour teams we know the level there is very high as well. The GC32 Racing Tour teams have been in Riva twice before, which we haven’t done. There are maybe ten teams that are really strong and will be fighting for the top spots.”

Alinghi has already been putting in time in Riva del Garda to acclimatise. “We’ve been practicing with other teams in great sailing conditions in Riva - a fantastic venue," continues Jorand. "There was a northerly breeze of 15-18 knots and flat water so we were hitting amazing top speeds.”

France’s Franck Cammas skippered and helmed Team France in the last America’s Cup but this was just one line of his giant sailing CV that includes winning the 2011-12 Volvo Ocean Race, the 2010 Route du Rhum and holding the Jules Verne Trophy for the fastest non-stop passage around the world.

Cammas’ NORAUTO team has already been in Riva for two weeks of training, but this is mainly to get back up to speed with the GC32, which they haven’t sailed in anger since 2016 when they won the GC32 Racing Tour.

Looking forward to the GC32 World Championship, Cammas says: “It is very good to have the two fleets and longer, more steady courses - it makes for better races and for us to enjoy the conditions in Garda. The competition is at a high level and everyone is motivated. It is good for the GC32 Racing Tour teams to meet the Extreme Sailing Series because we sail less than them. They have already raced one event this year and have very strong teams like Alinghi and Oman Air.”

As to how his Norauto team will get on, Cammas says he can only be optimistic at this stage: “We won’t know until we start. It’s all very well being the ‘World Champion of training’ but in races it is not the same! Plus we haven’t done much sailing with the boat for the last two years so it is important to train. The crew I have are very strong and powerful - they know the boat very well already, but it is new configuration for me.”

Racing at the GC32 World Championship starts on Thursday 24 May out of Riva del Garda following an official training day on 23 May. 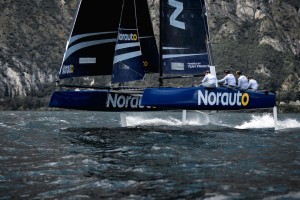