Towering clouds over the towering mountains surrounding Lake Garda made conditions challenging for competitors and race management on the opening day of this inaugural GC32 World Championship.

After a delay as the wind off Riva del Garda went through its normal transition from northerly Peler to southerly Ora, two races were held in full foiling conditions before the wind finally dropped and the competition was abandoned for the day.

Ernesto Bertarelli and his crew on Alinghi, present leader of the Extreme Sailing Series™, made easy meat of the first race, starting by the pin and hitting the left side hard. Yet their Swiss rivals on Jérôme Clerc-skippered Realteam, winner of last year’s GC32 Racing Tour, spent most of the first beat playing the right and when they converged with their compatriots were not far behind.

Alinghi extended on the run to win by 22 seconds (according to the SAP sailing analytics) from the Realteam. However after their outstanding debuts, Alinghi and Realteam were a little too enthusiastic starting race two: Both were called OCS, leaving them fourth and eighth overall respectively at the end of day one.

“It is the sort of race you want to have – lead at the start and at the end!” quipped Ernesto Bertarelli, who is helming his Alinghi GC32 for the first time in a race since last year’s GC32 Championship in Oman . “But it is early days.”

Of their mixed results today, Realteam’s skipper Jérôme Clerc said: “We know we have speed and can do manoeuvres. You just have to try and make less mistakes than the rest.” Realteam won here at the GC32 Riva Cup, opening event of last year’s GC32 Racing Tour.

If Alinghi dominated the first race, then emulating this in race two was INEOS Rebels UK, helmed by seasoned multiple Extreme Sailing Series winner Leigh McMillan. In fact they won the race by an even larger margin, coming home 37 seconds ahead of the Phil Robertson-skippered Oman Air.

Skipper of the British crew (who, apart from McMillan, are all aged 22-3), Will Alloway described their races: “In the first, we had a good first beat and then picked the wrong shift downwind and sailed out of the pressure. When we got to the leeward gate, we didn’t make the right choice and we dropped to the back of the fleet.
“In the second we started by the pin, took the right shift, and hooked into the pressure on the top left and came back with a really nice layline and good boat speed. Once we were ahead it was easier to stay ahead. We are really happy about how we got on. The guys did a really good job. Our boat handling is pretty solid.”

Argo’s owner-driver Jason Carroll came ashore kicking himself for having lost a lot of points today. The US team lies in seventh place in the 13 boat fleet. “We all looked at the forecast and we were expecting 10-14 knots out of the south and that isn’t quite what we got,” said Carroll. “I’m a little disappointed we didn’t have reaching starts, but the race committee made the best of what we had – I am looking forward to tomorrow.” Specifically Carroll said there had been several large wind holes out to the right side of the course. “Most people learned about that the hard way…”

Carroll is also leading the GC32 Worlds’ Owner-Driver Championship, although on countback from Simon Hull’s Frank Racing, the Kiwi team making a valiant start in their first ever regatta with the European GC32 fleet.

Having only sailed two races today, PRO Stuart Childerley has chosen to move the start of racing forward to 1230 CEST tomorrow. 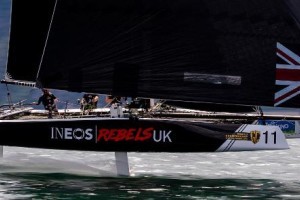 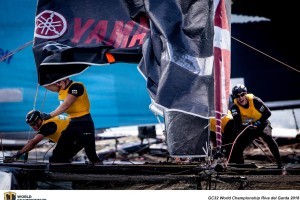 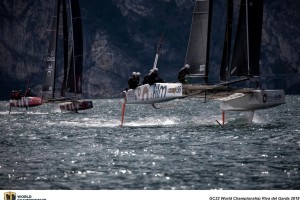 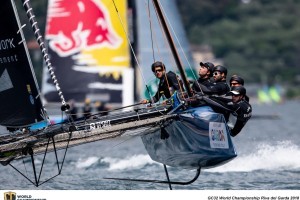 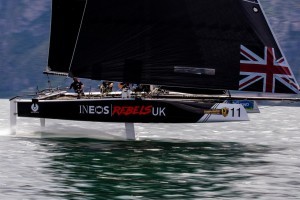 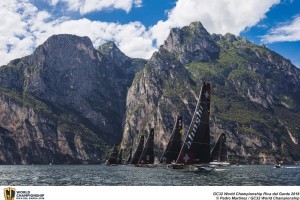