Conditions are shaping up for a fine start tomorrow to the GC32 Lagos Cup, second event of the 2018 GC32 Racing Tour. Eight teams from seven nations, from as far afield as Australia, New Zealand and the USA, will compete over the next four days off Lagos on Portugal’s Algarve coast.

Following the first scoring event on the 2018 GC32 Racing Tour, May’s inaugural class World Championship on Lake Garda, NORAUTO leads the 2018 GC32 Racing Tour. For skipper, French Volvo Ocean Race winner and America’s Cup skipper Franck Cammas, this is his first time to Lagos, although he competed nearby a decade ago aboard his ORMA 60 trimaran: “The weather conditions are looking very good here with flat water, except maybe on Friday-Saturday when the southerly wind will make it more tricky,” said Cammas. “For the two days of training so far conditions were excellent - flat water, but puffy at the top [of the course] and at the maximum range of what we could sail in with full mainsail.”

Portugal is a large market for NORAUTO and the French car repairs, accessories and parts manufacturer will be making full use of the GC32 Racing Tour’s guest program. This includes VIPs getting to sail on board the GC32s. This opportunity occurs during the daily ANONIMO Speed Challenge when guests get to experience these state of the art, foil-born flying catamarans sailing at maximum pace.

Cammas and his NORAUTO team are also looking forward to lining up with another America’s Cup team this week: “It is very nice to have Ben Ainslie and his team [INEOS Team GB] with us. It will make the level higher and we’ll have a good fight at the starts and around the course. They are a great reference for us. But there are other teams like Realteam who are very consistent too.”

While the two America’s Cup teams are this week’s favourites, up with them will be Jérôme Clerc’s crew on Realteam, champions of the 2017 GC32 Racing Tour. “It’s great to be sailing against the America’s Cup teams,” says the skipper of the Swiss team. “I hope we will sail well. We know we can, we just need to focus on that. We love the stronger conditions.”

Australian Simon Delzoppo’s .film Racing is also in the hunt. Delzoppo, who is also GC32 International Class Association President said: “This is our first time in Lagos - it is a beautiful town, the marina is fantastic and the facilities are awesome. It is one of the best venues we’ve been to. So far we have been made to feel very welcome here and have had two great days with flat water, offshore breeze and up to 20 knots.”

Delzoppo says he enjoys the Owner-Driver aspect of the GC32 Racing Tour, especially this year as he has a team from New Zealand with which to compete. “There is always a bit of banter, but there are plenty of other rivals out on the race course too. Frank Racing are performing very well, considering that to date they have mainly been sailing solo in Auckland. It’s great to have more and more owner-drivers joining the Tour. Plus the two teams using this as training in the lead up to the America’s Cup can only help raise the level of competition and cause everyone to rise with that. They are coming because this longer type of racing is what they are looking for. Hopefully we’ll see some more joining too and it will go from strength to strength.”

Racing proper starts at 1300 local time tomorrow with the prospect of sailing up to five races each day on windward-leeward courses with reaching starts, if conditions allow. Each day there will be a round of the ANONIMO Speed Challenge, comprising two reaching legs with a gybe in between. The team posting the fastest time during the GC32 Lagos Cup will receive an edition Anonimo Nautilo GC32 Racing Tour timepiece.

The GC32 Lagos Cup is taking place thanks to the support of the city of Lagos, local boatyard Sopromar, Marina de Lagos and Turismo do Algarve. 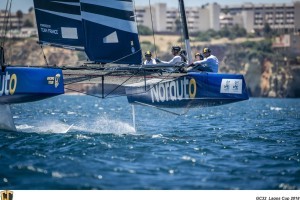 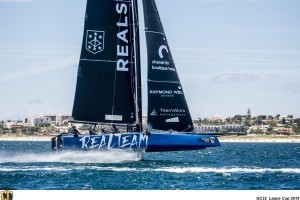