The final showdown between the eight flying catamarans competing on the 2018 GC32 Racing Tour starts tomorrow off the Anse Tabarly-Plages du Mourillon in Toulon. The GC32 TPM Med Cup is supported by Toulon Provence Mediterranée and the city of Toulon.

With strong easterly winds forecast for the four day event, the GC32 crews will face the toughest challenge of the season yet. “It will favour people who have sailed the boat a lot, like Franck [Cammas on NORAUTO],” explains Thomas le Breton, crew on Erik Maris’ Zoulou.  “The goal will be to find the right balance between speed and safety.”
Many of Zoulou’s crew, including Marseille resident Thierry Fouchier, competed here at the America’s Cup World Series event two years ago aboard Franck Cammas’ Team France. “It is a very nice place to sail. We were here two years ago and it was a bit lighter, but we trained before in a strong Mistral wind,” continued le Breton.

Currently Zoulou lies third overall on the GC32 Racing Tour leaderboard, but her position is under threat. Just one point behind is a formidable and familiar opponent, INEOS Team UK, the British America’s Cup challenge of Sir Ben Ainslie. Two years ago here in Toulon, Ainslie, the most successful Olympic sailor of all time, beat Team France by two points, albeit in different conditions: “We had very light winds apart from a very windy practice day, so we’ll see,” said Ainslie. “Toulon is a nice city and I am looking forward to sailing here again.”

Leading the GC32 Racing Tour comfortably by seven points is NORAUTO powered by Team France, skippered by Volvo Ocean Race, Route du Rhum and multiple ORMA 60 winner, Franck Cammas. Trailing them in second are the defending GC32 Racing Tour champions, Realteam from Switzerland. Skipper Jérôme Clerc missed the last GC32 racing in Villasimius due to the birth of his second daughter. Training here has been hampered by big conditions, but Clerc is looking forward to the competition: “I think it will be fun sailing in the windy and wavy conditions this week.”

The GC32 Racing Tour has an impressive array of international teams including the USA’s Argo, present leader of the 2018 Owner-Driver ranking, Simon Hull’s Frank Racing from New Zealand holding sixth overall and Simon Delzoppo’s .film Racing from Australia in seventh.

Racing on .film Racing is an international crew comprising one Swede, an Englishman and an Irishman, and French former America’s Cup skipper, Sébastien Col. So how is it sailing on an Australian boat? “It is good,” says Col. “I have always been attracted by sailing with different people and different nationalities and different kinds of boats. Sailing with the Australians has been about getting used to the accent and the jokes!” Three of the .film Racing crew, including Col, last year sailed on Malizia-Yacht Club de Monaco, skippered by Princess Caroline of Monaco’s youngest son Pierre Casiraghi.

Dark horse this week will be Métropole Toulon Provence Méditerranée, skippered by French Youth Match Racing champion, Robin Follin. The local heroes managed three days of training before the weather filled in. “We did one race with the seven boats, which was good because we won it!” admitted Follin, who at 23 is the youngest skipper competing this week. “It was a great surprise. We are happy because that shows we are competitive.”

Follin and his young crew – who last year represented France in the Red Bull Youth America’s Cup in Bermuda – competed in the first event of the GC32 Racing Tour in 2017. It has taken them a little while to reacquaint themselves with the flying catamaran. “We have spent much time working on this project, we met a lot of little problems, but finally we are there. This is  a very good gift for us.”

Racing at the GC32 TPM Med Cup takes place over Thursday 11th to Sunday 14th October, scheduled to start daily at 1300 CEST. Each day a round of the ANONIMO Speed Challenge will be held where competitors sail a course comprising two reaches with a gybe in between. The team with the highest average speed for this wins an ANONIMO Nautilo GC32 Racing Tour limited edition timepiece. 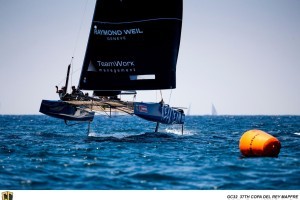 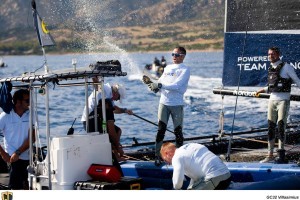 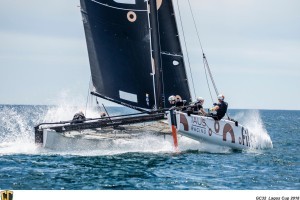 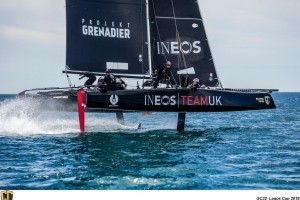 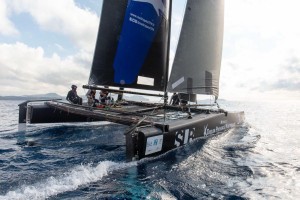