The damaged rig on race leader Jean-Luc Van Den Heede’s yacht Matmut has weathered two more southern ocean storms during the past week and the 73-year old Frenchman is now within 400 miles of Cape Horn. He is on course to round America's southern tip sometime on Friday and has a 3-day weather window to slip around before the next series of storms approach. He may just make it in time.

Jean-Luc has climbed up the mast five times to check repairs made two weeks ago to the lower shroud tang connections and is satisfied that sailing downwind at least, the mast is safe. Remarkably, Matmut has been averaging between 5.5 and 6.5 knots in recent days with just a headsail set. Yesterday, he reported: “My mast holds up for now, the mainsail has been down for 3 days, and I have only the staysail set, sometimes partially furled.

The sea is very strong, so strong that a wave broke the top rail holding my water generator. By some miracle, I managed to catch one part and I am making a repair using the car adjuster for the genoa. I manage quietly, I hope to be in Cape Horn in 3 or 4 days.”
Second placed Mark Slats who reported light winds and an uncomfortable sea early today, has now reached the eastern limit of the southern ocean NO-GO Zone and has begun a southerly decent down the latitudes towards Cape Horn. At 09:00 UTC today, his yacht Ohpen Maverick trailed Matmut by 1,386 miles, and though her speed was 6.3knots against 5.5 for the leader, the Dutchman has gained only 87 miles over the past 7 days. Slats has to average 1knot more than Matmut over the remaining distance back to Les Sables d’Olonne if he hopes to win.

3rd placed Estonian Uku Randmaa aboard One and All, is one of the losers during the past week having dropped more than 200 miles behind Matmut and seen Britain’s Sue Goodall in the 4th of these Rustler 36 yachts, DHL Express, gain a further 60 miles on him. Randmaa had used the calmer conditions to dive overboard to clean the barnacles from the bottom of his yacht and had cleared 85% of the growth when he spotted a shark circling the boat. He made a hasty retreat back onboard – and has not been back in the water since!

Barnacles have also been responsible for the sluggish performance of Tapio Lehtinen’s Finnish Gaia 36 Asteria back in 6th place. He is currently battling to clear the lee shore around New Zealand’s southern tip and reported yesterday: ‘STRESSINGLY CLOSE TO LAND’. Then early today: ‘WITH BAD POINTING ABILITY DUE 2 BARNACLES, HAD 2 TACK 4 SEA ROOM. At 09:00 UTC, Asteria was still heading almost due south in gale force winds away from the threat of land, adding to the 500 miles lost to Matmut during the past 7 days.

American/Hungarian Istvan Kopar sailing the Tradewind 35 Puffin in 5th place, had been making up ground on Susie Goodall, before clipping the northwest corner of the Southern Ocean NO-GO Zone yesterday. The first incursion between 03:00 and 03:20 UTC yesterday was undoubtedly caused by a sudden change of wind direction, but then he did it again between 06:00 and 09:00 spending a total time of 3 hours 20 minutes in the orange zone. That has led to a 6hour 40-minute time penalty being added to the 24-hour penalty picked up when Kopar stopped in the Cape Verde Islands to repair his self-steering and used his satellite phone. Kopar has the added disadvantage of not having a serviceable SSB radio to pick up an accurate time signal (essential for celestial navigation) or weather forecasts.

The other big losers this past week are Australian Mark Sinclair and Russia’s Igor Zaretskiy. Unlike Igor, Mark is clearly enjoying this global cruise so much that having passed 330 miles south of Cape Leeuwin yesterday now appears to be heading towards his home port of Adelaide to say ‘hi’ to family and friends and re-enact Sir Robin Knox-Johnston’s impromptu rendezvous 50 years before with the ship Kooringa, which passed on his position to Lloyds of London – providing the first news of Suhaili’s progress for more than 2 months

Sinclair’s other route departures, first to Cape Town to meet fellow Lello 34 owners, and then to cruise round the Cape of Good Hope and on up the east coast to Port Elizabeth have had consequences. Apart from the time lost on the fleet leaders, the Australian is now running perilously short of drinking water. Sinclair reported yesterday that he is now down to his last 37 litres, and unless he finds rain soon to replenish stocks, he is likely to be forced to stop at Hobart and take on fresh supplies, which will relegate him to the Chichester Class.

Zaretskiy may well be forced to do the same. His Endurance 35 Esmeralda is reportedly covered in barnacles and nursing a broken forestay secured at the top of the mast with temporary lashings. This might explain why Esmeralda was sailing at just 0.4knot today and has lost a further 600 miles on Matmut’s lead during the past week. 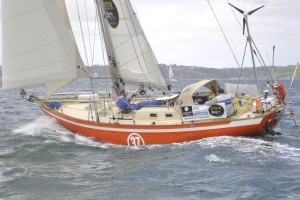 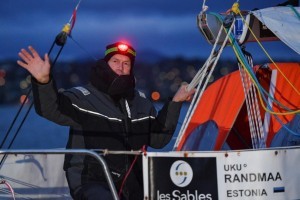 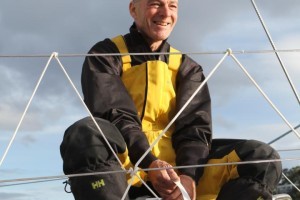