Racing sets sail tomorrow at the Maxi Yacht Rolex Cup and Rolex Maxi 72 World Championship at its traditional venue for the past 38 years of Porto Cervo, Sardinia. Here the fleet will compete on a mix of windward-leewards and coastal races taking in the Costa Smeralda’s magnificent La Maddalena archipelago and its famous ‘bomb alley’. Owners and A-list crews, including America’s Cup, Olympic and Volvo Ocean Race winners, fly in from across the globe for their annual opportunity to compete at this prestigious, historic event, hosted by the Yacht Club Costa Smeralda, the event’s joint organisers with the International Maxi Association, the official body that represents maxi boat racing around the world.

This year’s 41-strong fleet is diverse ranging from thoroughbred racers to cruiser-racers to classics to manufacturer classes and in length from 60 footers, like Benoît de Froidmont’s Wally 60 Wallyño and the Swan 601 Lorina 1895, up to the Baltic 130 My Song of Pier Luigi Loro Piana.

“I think the Maxi Yacht Rolex Cup in Porto Cervo is the best event. You have the best boats coming at the end of the summer – it is great,” says Loro Piana. “Usually we are cruising at this time of this year, but we have decided to come and have fun.”

My Song is competing in the SuperMaxi class (for maxis of 100+ft) against the three J Class yachts Svea, Velsheda and Topaz. “We are all about the same length - 40m – so it will be interesting to see how we have progressed in 80 years. I think we will have good competition,” continues Loro Piana.

According to Velsheda’s tactician Tom Dodson, any of the three Js could win but “we have possibly had the better scorecard. In St Barth’s Svea was first and we were second and Topaz was third. Then at the last regatta in Palma, we were first and Svea second.”

With their slender, elegant lines and long overhangs, the Js, which competed in 1930s America’s Cups, are very different to modern day lightweight carbon fibre fliers. For example, on Velsheda an army of 35 crew is required to man her 26 winches.

“We like racing off Porto Cervo in the flat water and the offshore races which is why we are always coming back,” says Dodson.

Fastest boat at the Maxi Yacht Rolex Cup is George David’s Rambler 88, the 2016 International Maxi Association Boat of the Year. The silver flier comes straight from claiming line honours in the Regata Palermo-Montecarlo, the final event in the IMA’s 2017-2018 Mediterranean Maxi Offshore Challenge.

Another top competition will be among the trio of WallyCentos competing in the Wally class. While Tango of Charif Souki is the newest of the breed, the defending champion of the Maxi Yacht Rolex Cup is David M. Leuschen’s Galateia. According to Tom Whidden, President and CEO of North Technology Group and strategist on Sir Lindsay Owen Jones’ Magic Carpet Cubed, the three WallyCentos: “are even and very well sailed - probably as good as you get. They have all made little tweaks and changes and the championship is anyone’s game. We have some new things for this regatta, so it will be pretty exciting.”

Magic Carpet Cubed led the class’ annual championship this year up until the offshore race in the Rolex Giraglia, but currently Tango is ahead. “It is close. This regatta will have a lot to say about where we end up,” says Whidden, who competed at the earliest Maxi Worlds in the 1980s. “The new boats are so much nicer to sail than the old IOR Maxis – they are quick and very responsive. Back then the characters were similar, but different - Jim Kilroy and George Coumantaros and Bill Koch. There are new characters now.” 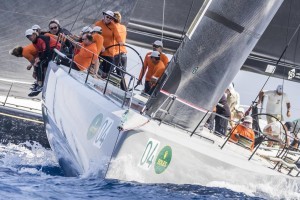 Perfect scorelines for Jethou and Capricorno as Rolex Giraglia concludes