Alessandro Del Bono's ILC Maxi Capricorno was OCS today, but is still jockeying for the lead in IRC 3

Once again PRO Georges Korhel from the Société Nautique de Saint-Tropez, along with the International Maxi Association's race officer Ariane Mainemare, worked their magic on the penultimate day of Les Voiles de Saint-Tropez' maxi week to hold a race successfully when everything in the forecast suggested otherwise due to the light winds. To achieve this racing was postponed for two hours and eventually only go underway at 1440 in a five knot easterly. Fortunately these are maxi yachts and some of the longest here have rigs more than 40m tall – for them there is usually some wind aloft.

Today the race committee bravely ran a longer course sending the fleet off to first mark, Issambres, half way to Fréjus and then south to the Verhuge mark, before courses were shortened.

Perhaps through frustration due to the wait, today there were several OCSes including the Southern Wind 100 Morgana in Maxi 1, and in Maxi 3 the Southern Wind 82 Ammonite, Walter Pizzoli's Swan 601 Les Amis and in Maxi 4 the CNB Bordeaux 60 Expression of London. However most costly was the OCS of Alessandro Del Bono's ILC maxi Capricorno, the present leader of the International Maxi Association's Mediterranean Maxi Inshore Challenge, which will be decided tomorrow. Here for yachts called OCS there is no re-start option, instead a mathematical penalty is applied. Fortunately Capricorno went on to win the race, only incurring a two point penalty, leaving them just one point astern of Terry Hui's Wally 77 Lyra overall.

Once again Dario Ferrari's 75ft long former Maxi 72 Cannonball sailed a 'near perfect' race. Racing in Maxi 2, she not only came home first on the water in her class (which includes 100 footers) but even beat all of Maxi 1 (which had started before her), with the exception of the Wally 107 Spirit of Malouen X.

"At the beginning there was a little more pressure, but then going out of the bay it went down and down," explained Cannonball's navigator Bruno Zirilli. "The race committee made a good decision to set the course and also to shorten course. At the start we were a bit behind but the other boats were fighting each other and slowing each other down. We got a lane to windward of everyone with good speed and were a little lucky because we got a big righty two minutes from the layline - being on the right was like Christmas! Plus the boat was a rocket." 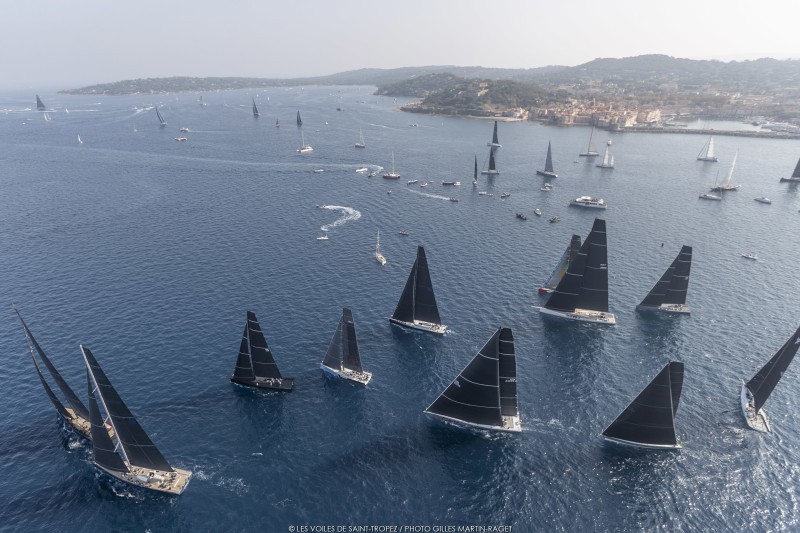 "It was nice to get a start in," explained America's Cup legend Tom Whidden, who backs up Jochen Schuemann on strategy aboard Magic Carpet Cubed. "The race committee did a really nice job and there was enough wind to sail. It was a little light, but that is sail boat racing. They did exactly the right thing to get a race in - it would have been easy to quit.

"We didn't have the best start, but on the reach that turned into a run we stayed low with our Code 0 which turned out to be a race winner. Upwind we are good in light air, so we continued to gain."

For a second day victory in Maxi 1 went to Spirit of Malouen X and remarkably going into the final day two other boats are tied for the overall lead with them: the McKeon-Vitters 108 Pattoo and the Swan 115 Jasi. Round the world sailor Klabbe Nylöf explained Jasi's race: "It was a pretty tight start and the line favoured the boat end, but we ended up further down the line. Then it was a good upwind with pressure on the right side.

"It was an intense, good fun race with everything in it. We are very happy with the crew work –we managed to get around the course in a good way and can't think of anywhere where we could have done better."

Amid all the OCSes in Maxi 3, Paul Berger's Swan 82FD Kallima came seventh with a crew including multiple round the world sailor Dee Caffari. Main trimmer, Quantum Sails' Adrien de Belloy described their race - his first both on board and racing at this event: "We started near the pin end, which was wrong and then headed left to the wrong side on the first beat! Everything started to die off leaving the bay but we kept our Code 0 for a bit longer than the other guys and got ourselves a bit further outside and into the new wind where we could get the kite up. Then everyone gybed inshore and we stayed out, which paid a lot - we overtook Umiko, Black Pepper and even Sud." The only issues they had apart from the light shifting winds was the Code Zero falling off its masthead hook.

There were celebrations taking place on board the CNB Bordeaux 60 Nina of London-based Milan Markovic's, which prevailed in Maxi 4 today, albeit by just 27 seconds under IRC over overall class leader Juerg Schneider's Swan 65 Saida, elevating them to fourth place overall.

Was Markovic surprised by their win? "Of course not! That was the plan! We have an excellent crew. They are all lovers of the sea and sailing - that is the flavour of this boat. And all the beautiful girls bring us luck!" His crew are all amateur but highly experienced and earlier this year competed over in the Caribbean at Les Voiles de Saint-Barth.

Tomorrow is the final day of Les Voiles de Saint-Tropez and the forecast is for yet another day of light winds. Hopefully the race committee will be able to work their magic yet again.