Two Spanish teams revelled in the Mediterranean conditions and now leading the Open and Corinthian Classes. The wind was oscillating 15 degrees either side of the course axis and the wind speed varied from 14-17 knots, it was definitely a day for keeping your head out of the boat, anticipating the changes in the conditions.

After being deep in the fleet in Race 3, Jose Maria Torcida (ESP) racing Noticia, clawed back through the fleet to finish 14th. The Spanish team followed that with a 2-1 in the last two races to take the lead for the championship.

“We are very happy! ” smiled Noticia skipper, Jose Maria Torcida. “Today we recovered from the back of the fleet in the first race to fight back up to fourteenth, basically we got the wrong side of the shift in that race. We got the tactics right in the second race, rounded the top mark in second and nearly won the race but Savasana made a good move on the downwind to pass us. In the last race we Port tacked the fleet and held on to take the win, which was fantastic, but we have only had five races.”
Judd Smith (USA) racing Africa, posted an 2-6-11 to move up to second place. Brian Keane (USA), runner up for the 2017 J/70 World Championship, scored a bullet in Race 4 but a 28th in the last race, pegged his team racing Savasana back to third. Bruno Pasquinelli (USA) racing Stampede on his birthday, was challenging for the overall lead going into the last race but 31st place put Stampede into fourth by the end of the day. Mascalzone Latino (MON) helmed by Matteo Savelli, is in fifth place after scoring a bullet in Race 3.

“We just want to have a chance when we go into the last day. Right now we are just looking to sail ourselves into a winning position with some good scores.” commented Judd Smith. “Obviously like the other 90 boats out there we want to have a good regatta, and do as well as you can, against a lot of great sailors.”
In the Corinthian Class, Luis Bugallo (ESP) racing Marnatura leads after scoring three good results today. It was a much better day for the team from Vigo, Spain. After sustaining damage on the first day and retiring, Marnatura now has a big lead in the Corinthian Class. Aldo Centanaro (URU) racing Pura Joda, was the top Corinthian team in the last race, moving the Uruguay team up to second. Lucas Authier (ARG) racing Manuto, remains in third for the Corinthian Class.
It was not a good day for the overnight leader and reigning world champion, Peter Duncan (USA) racing Relative Obscurity. “We set up to go left in the first two races, but it did not work out for us,” commented Duncan. “In the last race we went right and that didn't work either. Sometimes that happens but we are only two days into the regatta and there is plenty more racing to come. 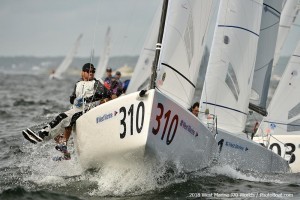 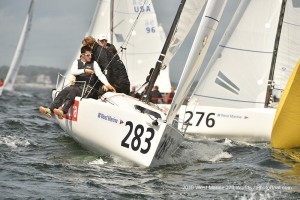 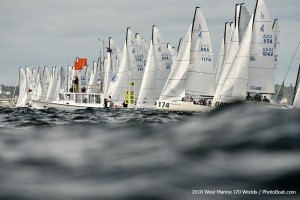