The J24 World Championships 2018 will be held at Fraglia Vela Riva, Italy

The J24 is one of the most loved and spread monotype classes worldwide with 50,000 sailors and over 5,000 boats in almost 40 countries with a dynamic competing activity both at Italian and international level.
“The Fraglia Vela Riva’s representatives showed the members of the international class and the J24 presidents the facilities of the club, pinpointing the range of possibilities for the moorings of the boats, the trailers parking, and the services offered to the competitors – explained Pietro Diamanti, J24 Italian president – particular attention is payed to the venue of the gauge the tonnage, since Tim Winger, Technical Chair of the international class, asked for an indoor space sheltered from the wind in other to prevent any mistake in the gauging. Hence, the tonnage gauging will be located in the near PalaVela building part of ‘Riva del Garda FiereCongressi. From May 29 to June 3, Riva del Garda will also organize the National Open J24 Championship, an excellent opportunity to test the racing field and the FVRiva organization ahead of the prestigious end of August.”
After the tour of the club, the participants of the World Council Meeting acknowledged the suitability of the facilities and appreciated the professional competence of Fraglia Vela Riva in running world events. Moreover, it was decreed that the World Championship will have a limited participation number of 80 boats. The Italian fleet, as hosting nation, has the right to entry 24 pre-selected boats and one boat for the former World Champion, one for the 2017 Italian Champion, one female team, one youth team (under 25) and two boats of the organizing club.
The crews selected so far are Ita 416 La Superba, Ita 212 Jamaica, Ita 501 Avoltore, Ita 304 Five for Fihting J, Ita 499 Kong Grifone, Ita 487 America Passage, Ita 405 Vigne Surrau, Ita 460 Botta Dritta, Ita 443 Aria , Ita 241 Libarium, Ita 371 J-Joc, Ita 424 Kismet and Ita 498 Pilgrim but the Coppa Italia, final stage of the National Circuit J24-Trofeo Ciccolo which will be organized on November 18 and November 19 by the Circolo Velico Ondabuena Academy in Taranto will award four more passes.
“It is a pleasure to host once again the J24 fleet for its major events as the Italian Championships (Open) in May and the Worlds at the end of August– stated the Fraglia Vela Riva’s President Giancarlo Mirandola and added “this class is part of the sailing history and reveals to be lively and spread worldwide. After having hosted the 1999 and 2009 Nationals here in Riva del Garda, it is a great honour to organize the World Championship in 2018. Our club turns out to be up to this kind of major sporting events by granting the high standards requests of the international class, not only in term of logistics.”
The regatta will consist of ten races, for which many talented teams are expected to sail being attracted not only by the magnificent race course, but also by the natural beauties of Garda Trentino and the renowned organizing skills of Fraglia Vela Riva.
Alce Nero will be the official technical sponsor of the J24 World Championship 2018, a brand of over one thousand organic farmers and beekeepers active since 1970s in Italy and worldwide. They will provide all the teams with special food boxes for the whole period of the event. Over 300 references of Alce Nero are available in 30 countries (Europe, Asia, America) and online at: www.alcenero.com 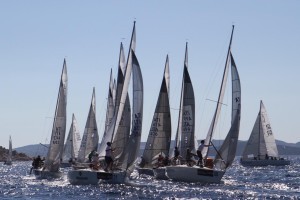 Works are going on to organize the J24 World Championship 2018