Stockholm, Sweden (September 18, 2017) - Ian Williams arrived as the man to beat in Stockholm, leading the 2017 series after four events, and being chased down by a hungry Scandinavian pack led by Wallén Racing just two points behind. The British crew kicked off the regatta showing they were here to do the business, taking four back-to-back wins on the opening day. From that point onwards the team led the regatta, untouchable on top.

With GAC Pindar the only team not to catch a last place finish over the event, consistent results were clearly the key to success over the 16 race event. Even with some poor starts on day two, Williams and crew managed to pull it back every time as fans cheered the team picking their way up through the fleet.

Wallén Racing, skippered by Danish Olympic gold medallist Jonas Warrer, was the team leading the charge to GAC Pindar coming in to this event, just two points shy on the leaderboard. After demonstrating huge potential winning the opening regatta in Gothenburg, the Danes traded the top spot on the series leaderboard with the Brits all summer. With only two points in the title race between these teams when they arrived in Stockholm, the event win was the only way to guarantee victory. Warrer’s team struggled with their starts on the first day, ending down in fifth place after six races. The team were very open about their starting issues, the next morning saying, “We lost races in the start and just couldn't pull ourselves through the fleet after that. We had a long talk yesterday and now let’s see what we can do out on the water today.” And true to his word, Jonas Warrer came out on the second day with a race win and a podium position to take him into the final day of the championship. In the end, the performance of GAC Pindar proved too much with the Danes finishing this regatta in fourth to leave them with the silver medal position on the overall leaderboard for the season, successfully defending an attack from the Swedish charge of Essiq Racing Team who end the season in third.

Fans looking for a local to cheer for had the choice of two Swedish boats in Johnie Berntsson’s Flux Team and Nicklas Dackhammar’s Essiq Racing Team. It was the latter who produced the most dramatic performance, highlighted when scoring three back-to-back bullets on Friday.

Nicklas kept the crowds on the edge of their seats, after dominating race two from the start to lose 4 places on the final upwind after sailing into a wind hole, only to turn his fortunes around and glide back past all on the final 100m to the finish line to an eruption from crowds on the shoreline.

Conditions at this event followed the low-end wind trend which has been seen on the 2017 series, testing light wind tactics and pressuring crews on their race starts reactions. The light wind has taken nothing away from racing over the five event series, with the tight race courses in city centre locations making the drama spectacular to watch and to be part of for the sailors. The Stockholm final saw the biggest public turnout as the riverbank of Norr Mälarstrand was lined with spectators at the weekend to enjoy the dramatic high performance racing on the water and the music and entertainment put on in the race village. 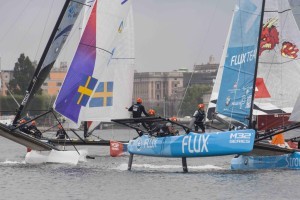 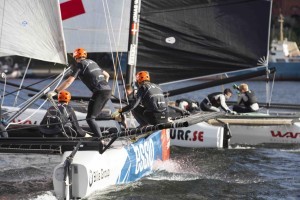