“Everybody’s super excited and happy”, said Devos after congratulating the team dockside. “It’s funny to win a regatta and not win a single race. In general, you want to sail consistent and not do horribly. If you have a shocker at the start, you’ve got to claw your way back.”

Though REV’s silent and consistent dominance of the Corinthian fleet was the headline of the day, heading into the final day of racing, there was a strong contingent of boats sitting within striking distance of the 2018 Corinthian trophy: Peter Taselaar’s Bliksem, Don Wilson’s Convexity and REV, all of whom had been particularly dominant throughout the regatta.

Convexity pressed the gas pedal early in the day taking the first bullet in race one, but it may have been too much too soon as they steadily faded in the rankings as several wind shifts went against the team as the day progressed. Bliksem also started the day strong right behind Convexity in the standings before they got blown out the back finishing dead last in the final race.

“Going into the last race we were six or seven points behind Rev and so we went quite aggressive at the start – I think we were a little early – and we couldn’t get off the line”, said Taselaar. “Congratulations to Rev, fantastic sailing.”

Further down the standings, Jennifer Wilson’s Convergence made a comeback after a rough third day on the water securing two first place finishes on the day.

Jennifer and tactician, Chris Steele, were a dangerous combination when she was allowed to drive her own lane and focus on speed. In fact, just as her brother, Don Wilson, accepted defeat in the final race of the day, Convergence appeared on his hip, almost swooping into his fourth-place finish after all but eliminating an eleven-point gap behind Convexity late in the day.

Finishing just behind Convergence, Dan Cheresh’s Extreme2 had been putting the pressure on Wilson all day hoping for a shot at fifth place. Unfortunately, the wheels fell off for Extreme2 in the second race and they couldn’t clamber back after that finishing two points back.

“We knew going into the last race that there was a point between us, but we split downwind and they got some leverage on us to have a great race,” said Cheresh. “Losing to boats as talented as what we saw this week isn’t a pleasure, but it’s still amazing. Quite frankly, having so much talent across all these boats is why I’m in the class.”

Claiming the overall title, defending M32 World Champion, Phil Robertson’s ChinaOne.Ningbo found themselves all day in the thick of the action, getting caught in the crosshairs of Bliksem and REV. However, the congestion wasn’t enough to keep the team down, though, as they increased their lead by another four points on the day.

With the 2018 M32 Series done and dusted, the fleet now looks towards future racing both year-round on the North American circuit as well as overseas. The fleet expects the addition of several new owner/driver campaigns to solidify the classes growth, following in the footsteps of programs such as Rick Devos’s Rev and the many other passionate amateurs who competed in Chicago the past four days.

“This event has been the culmination of our year of sailing work”, said Devos. “Amazing conditions, amazing venue and a great time; we’re all super excited. We’re looking forward to seeing everyone down in Miami and keeping the show going.” 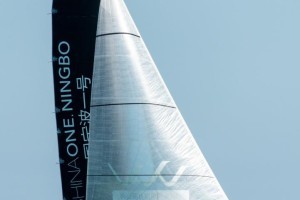 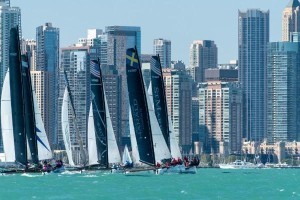 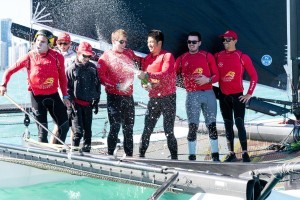 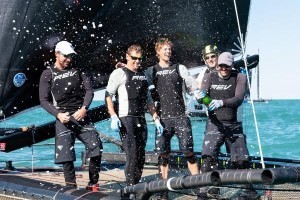