La Spezia, Italy, was the host of the first of three winter training sessions for the European M32 fleet. 4 boats took to the water, both established teams and new skippers testing the boat. "Getting a full run down with a coach on board is the best way to quickly get comfortable with the boat and this type of racing" says Jakob Wilson, M32 Product Manager, being on site with teams considering to join the racing.

The next opportunity will be March 11-13 when the fleet is again meeting up in La Spezia. The April 22-24 training will be held on Lake Garda in preparation for the European Series first event in Riva del Garda in May.

The Cetilar Vitamina sailing team with skipper Andrea LaCorte was very visible in La Spezia as the team will run a two boat campaign this season. "Great days with a bunch of practice starts and races. Yesterday really hot and great show in front of the Porto Venere historical harbour" comments Andrea. Both boats were training this last weekend and will be back again in February.

Harold Vermeulen, skipper of Dutch team Leeloo was in La Spezia for the first time and commented "We started each of the 3 days with our own plan and then came together to do a series of starts and races. Very efficient training time in a range of wind conditions. The last day was an absolute present with spring sun out and close racing in front of Porto Venere. Loved it!"

Miami Winter Series Continues
Meanwhile in America the Miami Winter Series is in full swing with the 2nd event starting next week. 10 boats have entered and the Bay of Biscayne is ready to welcome the teams. The fleet will be rejoined by several teams having had a break after the Worlds and we will again see Pursuit with Skipper Bill Ruh, Midtown with Larry Phillips and Gravedigger with James Prendergast. The final of the 3 event series is in April on which the much sought after "Rooster Trophy" will be awarded to the top team.

The Demo Boat
The M32 Demo Boat is the perfect way to get introduced to M32 racing in a way that is tailored to your background in racing and other classes. Maybe you have your own racing team and just need a few hints on M32 specifics, or maybe you need help with setting up an M32 experienced crew and start from the beginning with multihull racing. During the 2022 Spring there will be demo boats available both in Miami, Newport and Europe. 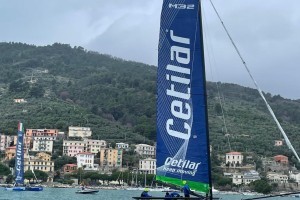 M32 Pendulum swings to Europe for the 2022 World Championship