The KiteFoilers are showing incredible pace here. But are they faster than GC32s?

With winds regularly gusting to 25 knots and above, racing could only be held for the KiteFoil and Windfoil classes on day two of Martinique Flying Regatta, the Caribbean’s first regatta exclusively for foiling boats. It was another roasting 30°C day, but with a dramatic sky filled with large cumulus clouds, each capable of pumping an extra 10 knots of wind down onto Baie de Fort de France.

Three races were held for both classes before the two fleets gathered en masse for the first round of the Karibea Speed Challenge. In this the boats flew down a reach back towards Fort de France’s 17th century Fort Saint Louis. The top two from the KiteFoil and Windfoil classes got to progress through to the Final of the Karibea Speed Challenge which will take place between a group comprising the two fastest competitors in each of the five classes racing here. The winner will receive a free weekend for two in Martinique’s Hotel Karibea.
Among the KiteFoilers, the podium seems fairly well laid out even after just day two of this five day event. Axel Mazella has won all seven races. Kieran le Borgne has come second in all seven races. Perhaps most surprisingly is that the ever versatile Vendée Globe skipper Morgan Lagravière has so successfully turned his hand to this new and very different discipline, finishing third in all but one race so far.

Mazella was so much faster than almost all the others that on the relatively short course - that comprised two windward-leewards with reaching first and final legs - he was still lapping competitors.

The reason for the top trio’s success, says Mazella is simply that they compete internationally on the IKA Kitefoil Gold Cup, whereas their competition here does not. “There is a big step between us and them.” Mazella may only be 20, but he is already among the  top KiteFoilers in the world at this future Olympic discipline, having been Under 21 World Champion last year when he also won the IKA Kitefoil Gold Cup.

As to today’s competition Mazella observed: “It was stronger than yesterday. The wind would go up and down with the clouds, but there was no rain. It is my first time to Martinique and it is really nice here. I am looking forward to doing the long distance race around the islands on Friday and the Karibea Speed Challenge.” Mazella reckoned that today he hit 37 knots. “This is a superb event, friendly between all the kiteboarders and super cool.”

Having almost as much success in the Windfoil foiling sailboards is Trevor Caraes. Today the young Olympic RS:X sailor, based out of Brest, scored a 1-2-1, nicely complementing his three bullets out of four races yesterday.
“It was fun, very nice conditions, like yesterday,” said Caraes. “The Karibea Speed Challenge was nice because it was the first time we’ve done that. It was nice to sail against the Kite surfs. That is the first time I’ve done it - we don’t get to do that very often, but we need to improve a lot if we want to go as fast as they do.”

Caraes is not the only French Olympic sailboarder in the Windfoil class. Lying in fourth place, behind Thomas Lequesne and Mathurin Jolivet, is Hélène Noesmoen, three time RS:X Youth World Champion and who in January won the Women’s RS:X seniors event at the World Cup Series Miami event.

“It was really cool, really windy about 25 knots,” said Noesmoen of today’s racing. “I had some good starts, but I am a bit slower than the boys. It is hard to challenge them.”

Going through to Saturday’s finals of the Karibea Speed Challenge will be Trevor Caraes and Thomas Lequesne in the Windfoil and Axel Mazella and Kieran le Borgne in the KiteFoil classes.

Tomorrow the forecast indicates lighter winds of 10-15 knots, gusting to 20, which will be perfect to get the GC32 catamarans, Moths and Onefly classes back out on to the race course after their day ashore. 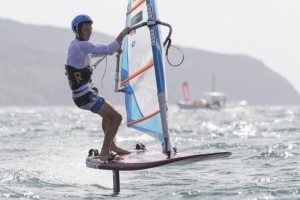