Friday was a big day on the water at Martinique Flying Regatta, the first Caribbean event for foiling boats. It kicked off with a dramatic, simultaneous start for all five classes from under the shadow of Fort de France’s Fort Saint Louis, before they headed off a coastal race (or ‘Raid’ in French) on separate courses according to their speed and offshore suitability: The GC32, KiteFoil and Windfoil classes sailed 26 miles south around Rocher du Diamant while the Oneflys followed a 10 mile course within the Baie de Fort de France. Significantly these races all carried a 3x results co-efficient.

Proving they are unquestionably the fastest at Martinique Flying Regatta, the KiteFoilers romped around their course in just over 1 hour 20 minutes. Once again the podium order remained steadfastly the IKA Kitefoil Gold Cup pros Axel Mazella and Kieran le Borgne, first and second ahead of Vendée Globe skipper Morgan Lagraviere. They finished almost 30 minutes ahead of the highly tipped GC32s Franck Cammas’ NORAUTO and Team France Jeune, skippered by Robin Follin.

“It was really good for the KiteFoils,” said Kieran le Borgne. “We were faster than the GC32s and it was beautiful to go around the Rocher du Diamant. I’m from Brittany so the waves weren’t a problem, most difficult was the wind - we had to go a long way offshore to avoid the lulls. Fortunately Axel was a bit ahead of me, so I could see what was happening.”

As to why Axel is always first and he always second, le Borgne explained: “He is a bit faster than me downwind and upwind we are similar. During the Raid he got a bit of an advantage, but then I came back into him on the last upwind and finished two minutes behind him.”

In the Windfoil (foiling windsurfers) the battle has tightened up after Thomas Lequesne won the Raid with Trevor Caraes coming home second ahead of Corentin Beaufaert. Thanks to the 3x coefficient Lequesne has now closed to within four points of Caraes going into the final day.

For NORAUTO’s crew, there was some relief that their Solitaire du Figaro, Volvo Ocean Race and Route du Rhum-winning skipper Franck Cammas should appropriately win the coastal race. This also caused NORAUTO to recover the lead from their young rivals on Team France Jeune.

“It was a good idea to do this long distance race with the GC32 - the Rocher du Diamant was amazing,” said NORAUTO trimmer Arnaud Jarlegan. “It is the first time we’ve done that. The navigation makes the game a little different, but it is very interesting, because you can fall into a lull, and the other boats close back up on you.”

While there were reasonable waves out by the rock, Jarlegan said they didn’t come close to capsizing although there were some hair-raising moments as the boat launched causing the foils to leave the water. NORAUTO’s victory leaves them with a slender two point lead going into the final day.

The Moth’s coastal race was abandoned and so they ended up racing four windward-leewards with reaching starts and finishes. With another ultra-consistent performance today, combined with a second discard kicking in, Anthony Rezzoug has taken over the lead from, and is now five points ahead of, David Holenweg. This was despite Holenweg winning two races (the others going to Rezzoug and to Holenweg’s Swiss compatriot Philippe Schiller).

In the first race Holenweg said he was leading, but set off on a third lap instead of heading for the finish. In the third race he scored a seventh after a bad start. “The level is good within our group. There are about ten people here fighting for first. The race course with the reaching starts was fun – the races are really short, the weather was beautiful with about 12-18 knots of wind and the sea state a lot flatter than yesterday.”

Among the top scorers today was British Moth sailor David Jessop whose 3-6-5-8 has elevated him to seventh place overall and into the lead in the unofficial four boat British competition. “We have all had some breakages and bad luck,” said Jessop. “I am very happy with today. I have been really pleased with my upwind boat speed, although my downwind has been a little bit sketchy. In the first race I found a high mode so I was able to do a one tack beat and that saved me quite a lot of time.”

In the Onefly class, Julien Villion has recovered the lead and is three points ahead of his Beijaflore teammate Guillaume Pirouelle. However it was Gabriel Skoczek who won the Raid in the Moth-like one design singlehanders, while Villion was second.

“I was first, but then I missed the last buoy,” Pirouelle explained. “So I ended up fifth and it carries a co-efficient of 3. It was great conditions and a really nice course - it was fun to do it and the start was great with all of the different boats.” Pirouelle redeemed himself later by winning both of the afternoon’s two windward-leeward races.

Tomorrow for the final day of Martinique Flying Regatta, the program returns to short course racing solely within the Baie de Fort de France, culminating in the Karibea Speed Challenge for the top two in each class. In this, the fastest down this 0.4 mile course will win a weekend for two at Martinique’s Hotel Karibea. 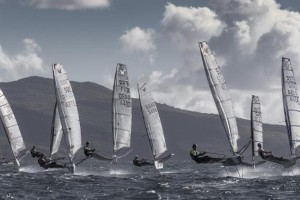